Time for a Bull Market Correction

a new, secular Bull Market began in November 2012. While there is still some chance that a bear market (D) wave top could come in the vicinity of the 2007 highs, evidence is mounting that the 2011-2012 period was a stealth (E) wave ending a long term triangle and that recent price breakouts and changes to the technical character of the market mark the start of a very long term Major (V) bull market...

My current analysis is that the S&P 500 has reached an intermediate term top in the context of the early stages of a impulsive bull market wave.  The latest technical development supporting the bull market thesis is that we have seen the completion of a rather clear Elliott Wave 5 sequence bullish impulsive wave with subwaves that also show bullish impulsive structures and characteristics.  On March 15th the market began a Wave 2 correction of the Wave 1 that started in November 2012.  This corrective wave could be expected to last an additional 3-6 weeks and should retrace about 38.2% of Wave 1.  The market recently completed a B wave rally that carried slightly beyond the March 15th high resulting in a host of bearish technical setups that provided an excellent exit opportunity for long side trades and even a nice shorting entry for more active swing traders.  The current C wave down will probably complete a larger degree A wave with another B wave rally likely (possibly back to the recent high)  followed by a larger C wave decline.  The subsequent C of 2 bottom should be one of the best long term entry points in a bull market that projects to late 2015-early 2016.

While it's too soon to discard the possibility that SPX has completed a (D) wave cyclical bull market and will now enter into the final (E) wave leg of the long term triangle bear market, I do not think that the technical setup supports that at this point.  The technical conditions attendant at the 2000 and 2007 tops are not present at the moment.  It is possible perhaps that after this current decline the market rallies to a higher level (1600-1620) making a B wave high with the kinds of bearish technical divergences on the weekly and monthly charts that could mark a long term wave (D) top. 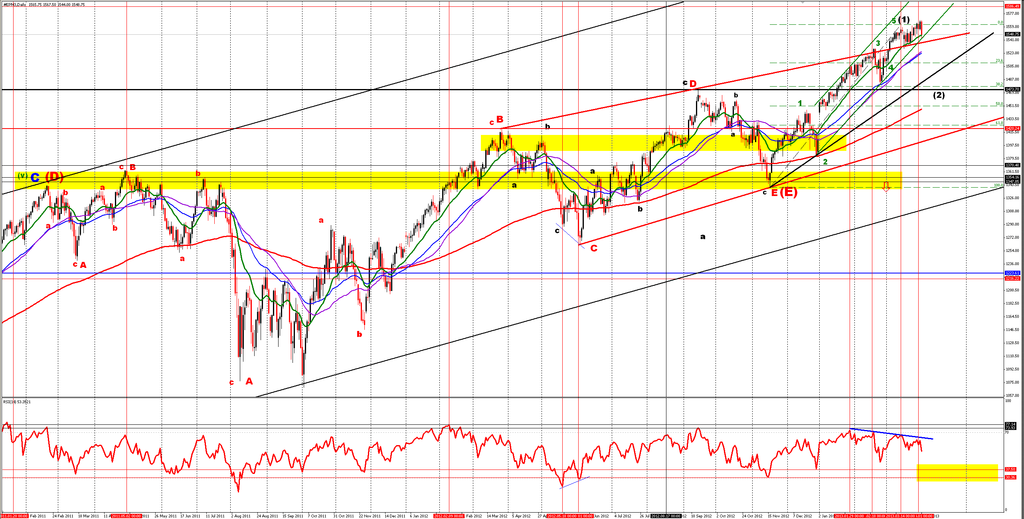 It's interesting to note that when the market was setup technically for a correction the news catalysts necessary to spark the move appeared out of nowhere.  On March 15th it was the onset of the Cyrpus crisis and today it was a spate of negative economic news.  In the wake of the weak ADP report today there's considerable risk that the jobs picture may show further erosion in the Challenger and Jobless Claims reports on Thursday and the Employment Report on Friday.  Earnings season starts very soon and warnings from S&P 500 companies have been surging. 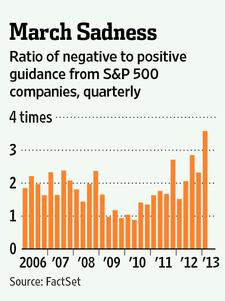 Additionally, it is likely that Cyprus bailout story is not yet fully written and that there are other shoes yet to soon drop in the ongoing European debt bubble saga.  Overall I expect the period of this correction to generate slightly more fear and volatility than the April 2012 correction but not as much as the April 2010 episode.  I'm comfortably short at the moment and looking forward to a good long term buying opportunity that should be good for a holding period of a year or more.

PLEASE CONSIDER MAKING A DONATION TO SUPPORT MY WORK USING THE PAYPAL LINK BELOW.    THANK YOU!

The correction appears to have been of a lesser degree.  The Bull continues with only a short term (rather than intermediate term) correction.