The most important chart of the century... 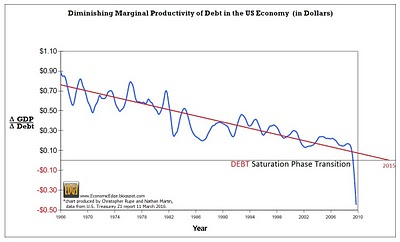 
This is a very simple chart. It takes the change in GDP and divides it by the change in Debt. What it shows is how much productivity is gained
by infusing $1 of debt into our debt backed money system.

Back in the early 1960s a dollar of new debt added almost a dollar to the
nation’s output of goods and services. As more debt enters the system
the productivity gained by new debt diminishes. This produced a path
that was following a diminishing line targeting ZERO in the year 2015.
This meant that we could expect that each new dollar of debt added in
the year 2015 would add NOTHING to our productivity.

Then a funny thing happened along the way. Macroeconomic DEBT SATURATION
occurred causing a phase transition with our debt relationship. This is
because total income can no longer support total debt. In the third
quarter of 2009 each dollar of debt added produced NEGATIVE 15 cents of
productivity, and at the end of 2009, each dollar of new debt now
SUBTRACTS 45 cents from GDP!

This is mathematical PROOF that debt saturation has occurred. Continuing to add debt into a saturated
system, where all money is debt, leads only to future defaults and to
higher unemployment.

This is the dilemma created by our top down debt backed money structure. Because all money is backed by a
liability, and carries interest, it guarantees mathematically that
there will be losers and that the system will eventually reach the
natural limits, the ability of incomes to service debt.

The data for the diminishing productivity of debt chart comes from the U.S. Treasury’s latest Z1 data, the complete report is posted in the link above...