The Golden Triangle. First the pain, then the gain. 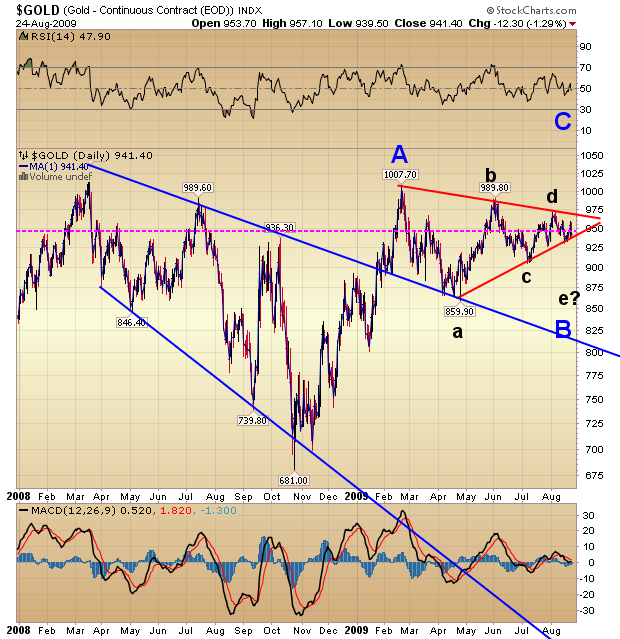 Today gold declined below an important short-term support at 947 (magenta line) and came to rest at the bottom trendline of a symmetrical triangle. Symmetrical triangles are continuation formations, but not without their foibles. That is why I inserted, "First the pain, then the gain." in the title. Having finished wave d, gold is now working out wave e, the rogue wave of the formation. This is the fake out wave that may shake out the weaker longs just before exploding to new highs.

Think of the triangle formation as a coiled spring. The pattern is getting wound tighter and tighter. Finally it snaps. Unfortunately, it can snap in the wrong direction for a short while. That happens more often than most people think. So let's talk about support areas. The next (intermediate-term) support is at 930. Should gold decline below intermediate-term support, it opens a potential trap door all the way to trend support at 875. These are supports that are available through my proprietary model, which tracks the gold cycles. We may be emerging out of the negative season for gold. However, the trend cycle bottom which is usually due this time of year hasn't been tested yet, so the odds are better than even that 875 may be tested before gold gets its launch into the next level of its bull market.

Using Elliott Wave analysis, the pattern appears to be an A-B-C formation, where the standard target is that C is equal to A. However, in a triangle, the measure for the target is often taken starting at the apex of the triangle, approximately 960. Wave A is 326 points, so the target for wave C may be 1286. By the way, this agrees with the target for the broadening descending wedge, which also has a target near 1300, but its odds of failure are 37% (source: Thomas BUlkowski's Encyclopedia of Chart Patterns), pp 87-99.) Add the statistics of a symmetrical triangle with only a 5% failure rate (source: Bulkowski, pp560-575) and the odds are nicely stacked, IMO. The targets mentioned may be minimal targets, since a wave C may be a Fibonacci multiple of wave A.

Comment by Steven Vincent on August 26, 2009 at 1:03pm
Gold has been somewhat resilient today as the dollar has rallied sharply and crude oil has been quite weak. Clearly a strong break in either direction is likely soon.

Comment by Tony Cherniawski on August 26, 2009 at 11:31am
I agree that 875 may provide the support needed to "reverse the rogue." My work shows that the short term trendline support may be broken below 935.

Comment by Steven Vincent on August 25, 2009 at 6:50pm
Also note that the black trend line in the chart above is the secondary support line for the entire bull trend. It's currently around 875 which correlates with your target.

Comment by Steven Vincent on August 25, 2009 at 6:48pm
Thanks for that Tony. I too am following the triangle pattern in gold closely. I actually see two triangles at play. The larger, primary triangle has already been violated to the downside. We also closed below the 50 EMA today. I have hedged my long position. I think this could be a nasty shakeout of weak hands. Markets love to do that, and particularly markets that are known to be manipulated!