The BullBear Market Update: What Kind of a Top is This?

The pullback of the last few days has the bears more excited than they have been for quite some time. A quick read of the internet reveals quite a few pundits ready to call for the resumption of the secular bear.

Indeed, the last few days have seen a distinct shift in the tape action from "buy the dip" to "sell the rallies". That's bearish and worth noting.

Much has been made of today's negative Retail Sales report. And in fact this was the first case in recent memory where bad news was not ignored and was instead sold.

However, the pullback has brought the SPX to an area of what should be heavy support. There is the bottom rail of the uptrend channel, the 20 EMA and horizontal support at 880-875. If this should fail the 50 EMA will be tested. A failure and weekly close below the 50 EMA calls the entire bull move into question and may mean a retest of the bottom. Note the relatively low volume on the pullback last 3 days. 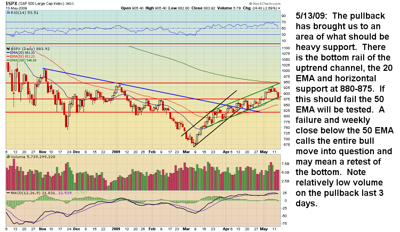 We will most likely get the retest of SPX 875 that I have been looking for and I will buy any close after that test above 880. My stop would then be a close below 870. My thesis is that if this bull move is "for real" it will find support in this region and reverse.

The 200 EMA has declined significantly and has now started to flatten out. A good rally will cause it to begin to turn up. A test of the 200 EMA in the 950 area would likely be a short term top as well and we would then begin a period of range trading until the relationship between the 50 and 200 EMA's that I wrote of in my last report is worked out.

I can say I think this could go either way but I remain intermediate term bullish for now. The next few days will tell us much about the character of this market by how it handles this support zone and how it responds to news. Markets like to give strong head fake moves and a drop to the 50 EMA might get enough bears short to provide the fodder for a move to new highs around the 200 EMA.

My view is that the fundamental fundamental in this market is the supply/demand structure. Liquidity is a key element on the demand side of the equation. The Yen carry trade has been a key source of liquidity in the past bull market and many bullish traders have noted the apparent resumption of the short Yen, long risk trade. A look at the EuroYen chart shows price trading within a classic configuration of a rising 50 EMA and declining 200 EMA. How this plays out in the next week or so may be a big "tell" on the future movements of risk assets such as equities. 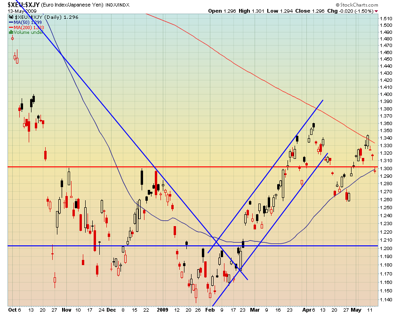 "There is only one side to the stock market; not the bull side or the bear side but the right side"