From time to time I release the full text of my BullBear Market Report to the general public.  This edition from September 19, 2011 calls the subsequent moves in the major stock indices nearly exactly.  From there we got a move to a lower low followed by a strong corrective rally that has caught most market participants off guard.

As investors once again hang on the monetary policy decisions made by the Federal Reserve Board, markets appear poised to break out above another level of resistance.  We should receive news of some kind of deal between Greece and its creditors very soon, which together with some sort of "easing" from the Fed should provide the excuse needed for traders to buy and shorts to cover.  None of this news really matters since it is the underlying supply/demand conditions of the markets which determines direction, but in the short term these should be catalysts.  It's widely recognized that the Fed can't really do much of anything to stimulate the economy or support the markets except in the short term.  It could voluntarily dissolve itself and issue a policy statement admitting that the Keynesian Monetarist experiment of the the last 100 years is a total failure and that policies of sound money and free market economics should be adopted going forward, but somehow that option does not seem likely to be on the agenda this week.

On an intermediate and long term basis the equities markets are still too oversold and sentiment is still too pervasively bearish to permit a substantial further decline, while in the short term there is still room for the markets to advance into resistance.  I anticipate a high sometime later this week.  At this time I would be looking to sell longs and turn around for a decent sell wave.  After the sugar rush of the Fed candy and Greece deal news wears off, sellers will likely step up and start to lay off shares.

Having said that. it is more likely that I am erring on the conservative side with regards to the upside potential in the market rather than erring on the side of underestimating the downside potential.  I would even go so far as to say that the major B wave could retrace over 100% of the A wave decline and even make a new high.  While this is an outlier possibility at this time, the mere fact that virtually no one is willing to entertain it makes it all the more likely.

The charts and the technical indicators tend to suggest that we have at least a month if not several months more of choppy, volatile trading ahead of us before the much anticipated C wave down of the bear market can begin.  I know we would all just prefer to set a position and let it roll, but that does not appear to be our fate at this time.  We'll have to remain patient and much more active than we might otherwise like to be.

Today a minor correction ensued in the wake of news regarding Greece's debt situation.  Almost all of the day's decline occurred in the futures gap and the market spent the rest of the session consolidating with little follow through selling pressure.  It rallied into the close.  Generally this fits with a situation of temporarily exhausted selling pressure.  Similarly, news that Italy's sovereign debt had been downgraded after the N.Y. market close sent futures down 1%, but that didn't last long and in Asia trade and early European trade markets encountered buying pressure.

(Note: most charts in this report do not reflect Monday's trading.  Nothing much changed technically on Monday).

Here's my current most probable scenario:

Here, the entire move off the August 9 low is an A wave of a larger major B wave.  The fifth wave of the C wave began today and that should complete the formation.  The next move would be a scary B wave down which would mistakenly convince most market participants that Armageddon has begun.  It could make a higher low or a lower low.  It's impossible to say at this time, but my guess is it will make a higher low as indicated while most technical indicators set new bearish readings thereby registering a bullish divergence.  That would set up the big C of B which would be a wave of sufficient strength to reset all long and intermediate term technicals for the major C leg down of the bear market.

The following scenario is functionally identical to the one above, but in this case we are calling the wave off the August 9 low a five wave triangle or perhaps a leading diagonal A wave:

In the following scenario, we are currently in a big C wave move up into resistance that will continue through several levels of resistance to complete the major B wave.  It certainly would be unexpected, but I consider this a real possibility.  In this case we could continue to see some weakness into the next few days for a ii of C, which would be reversed with a big iii of C into the 200 EMA:

I would also add that the above scenario has the potential to go all the way to new highs.  In fact we have seen a similar setup before.  In the 2007 topping process, the market also began its bear market with a sidways correction followed by a scary 12% C wave plunge: It then bottomed and eventually rallied to new highs before the main body of the bear market ensued.  While an exact replication of this scenario is unlikely, we could see something functionally similar.

Keep in mind that all of these scenarios are long term bearish.  Some account for more short/intermediate term bullishness than others.  In the following scenario, the major B wave has completed with an abcde triangle and the major C began today.  I don't give this much play.  The shape is wrong and the internal structures are not really consistent.  But it is a possibility.  If we see a big 3-4% down day soon, we would have to put this on the table:

Finally, there is the bullish scenario.  Here, the entire move off the February high was a wave ii correction of the move off the July 2010 bottom.  The move so far off the August 9 low would be a leading diagonal and we would see a final wave 1 high soon followed by a wave 2 to a lower high.  I give this a very low rating for numerous reasons of wave structure and technical conditions.  But it is nonetheless a plausible possibility and we need to keep the other side of the market on the radar screen.  If there is a bullish case to be made, this is it:

Nasdaq 100 has tested its trendline break from below and is well above its moving averages.  Keep in mind that NDX is heavily weighted by AAPL which comprises 15% of the index.  Apple made new all time highs today:

Meanwhile, Dow is lagging a bit and has yet to test its 50 EMA.

Germany's DAX continues a complex B wave correction.  It tagged upper resistance at the key 5500 level today.  A breakout and move back above 5500 would be a key short or intermediate term bullish signal.  At this time I am expecting the formation to end with a bearish running flat, which means on the subsequent wave down it should make a good lower low.

In summary, the next tradeable move for the major indices is likely lower, but in most of the scenarios we are tracking an additional move higher is called for before the selling can begin.  And the upside potential is unclear and could easily be underestimated.  I am long and holding my position until the situation becomes clearer and the field of competing scenarios is narrowed.

Some key US sectors look significantly more bullish than the rest of the market.  Retailers, Consumer and Semiconductors have outperformed to higher highs lately: 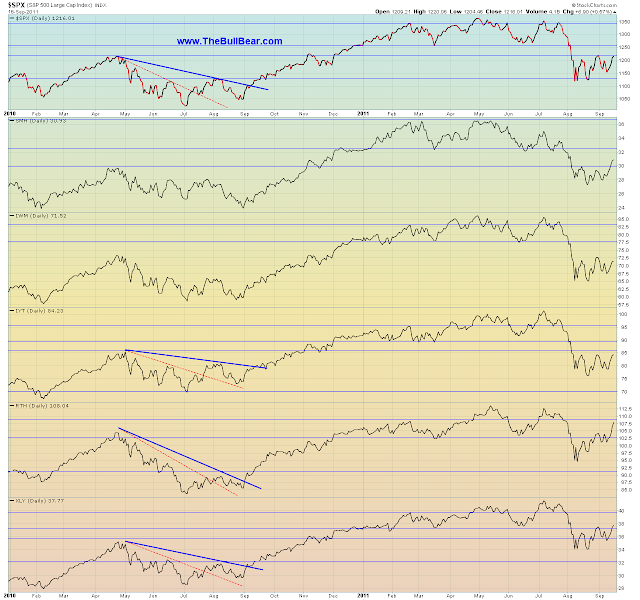 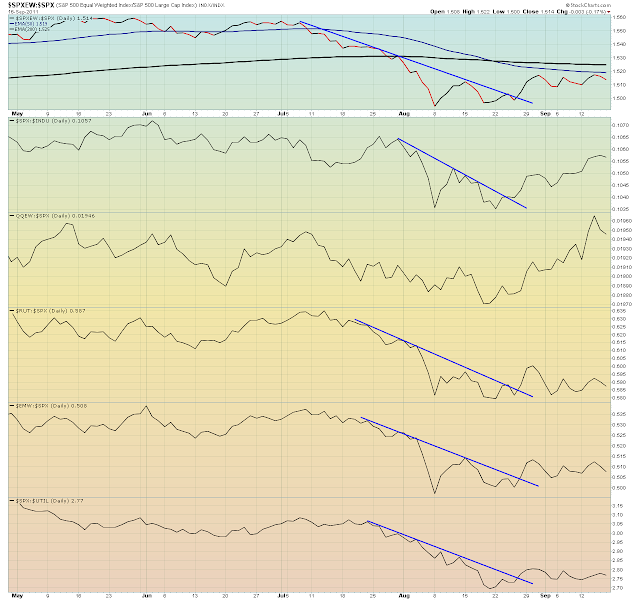 EMW (Wilshire 5000 excluding SPX) ratio charts have generally been rising, but could roll over at any time: 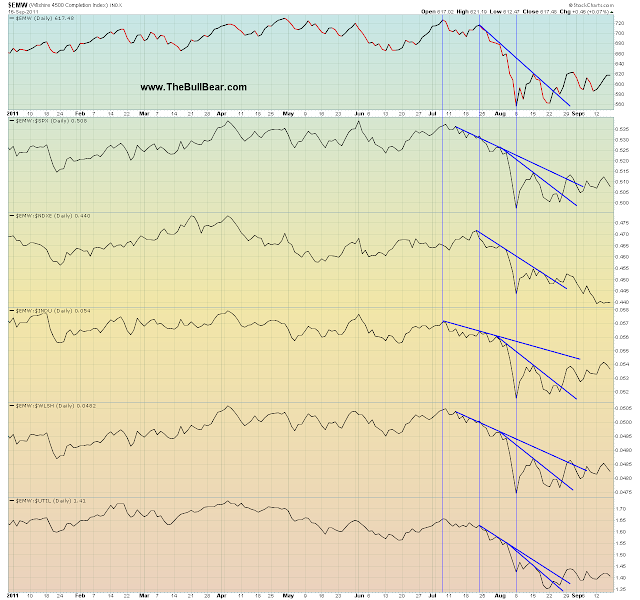 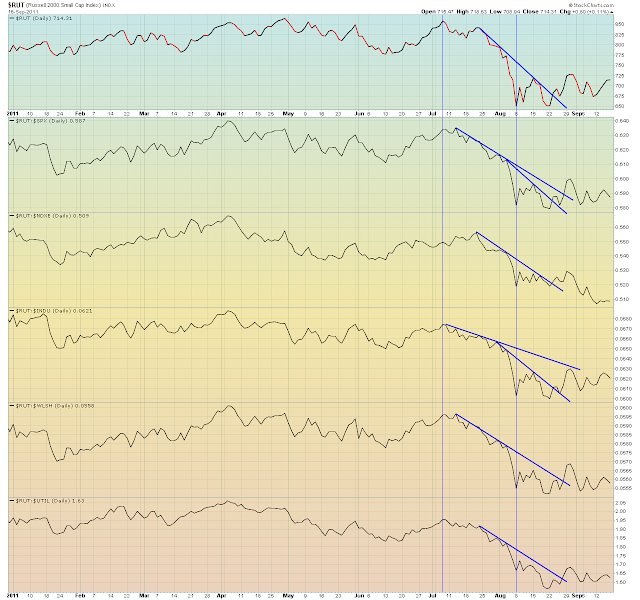 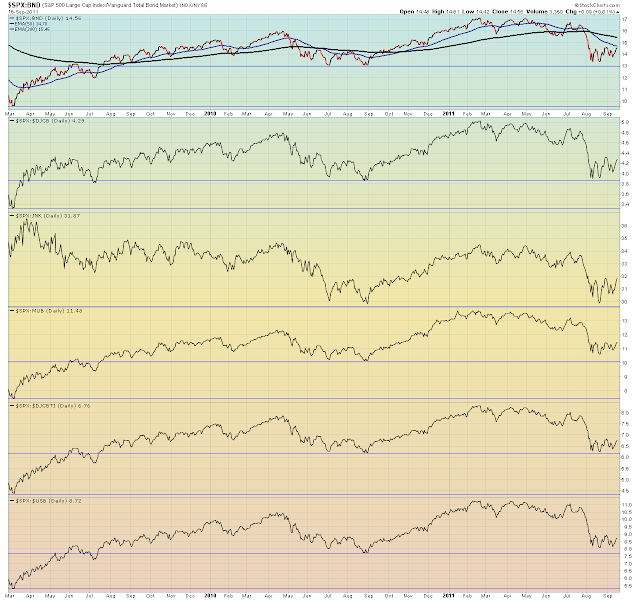 Emerging Markets and BRIC ETF to SPX ratio charts have broken down recently: 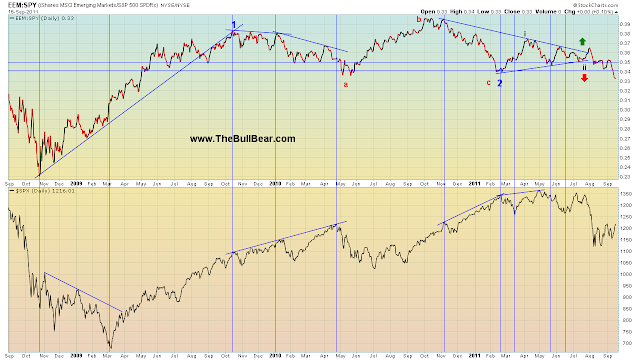 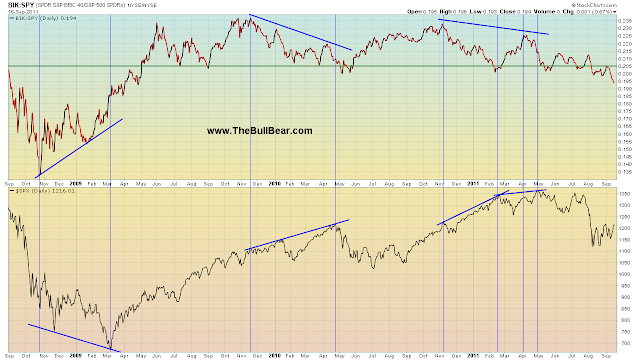 Overall, ratio charts are showing a mixed picture that could argue for a move in either direction.  That fits with an ongoing, volatile B wave.

Summation Index has been climbing steadily but still has room to move to the upside before it hits resistance. 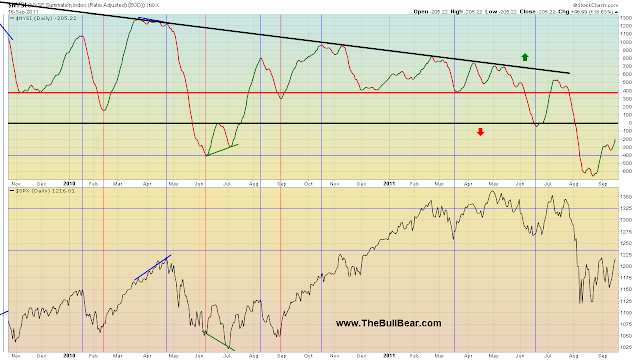 McClellan Oscillator pulled back from overbought today and its next move into resistance will probably mark an important high: Stocks Above the 200 EMA is still very oversold.  I would be looking for a push to the 50 EMA and the July 2010 low to mark an interim high in the markets: 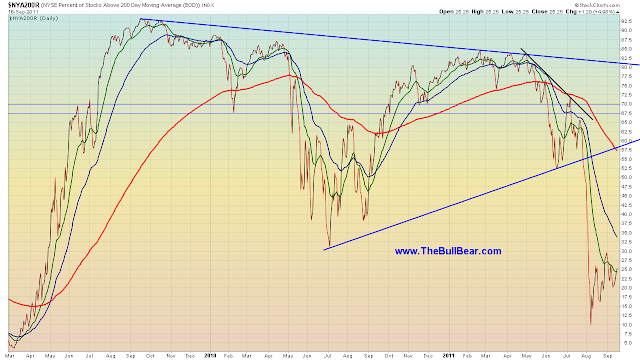 Stocks Above 50 EMA has been pushing higher into resistance. A push above the resistance band should mark an interim high for the markets: 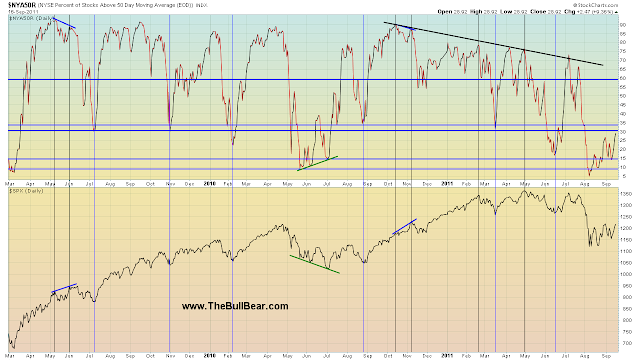 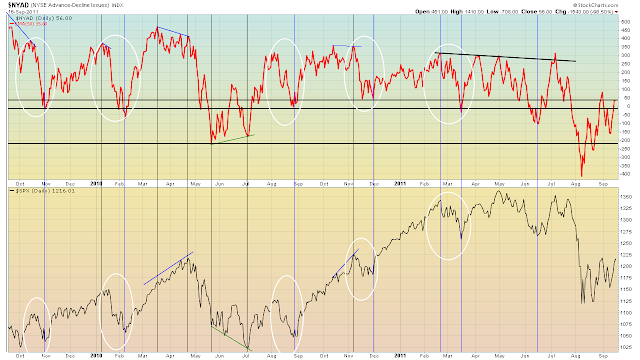 50 Day Advance-Decline Volume has pushed into its resistance zone: 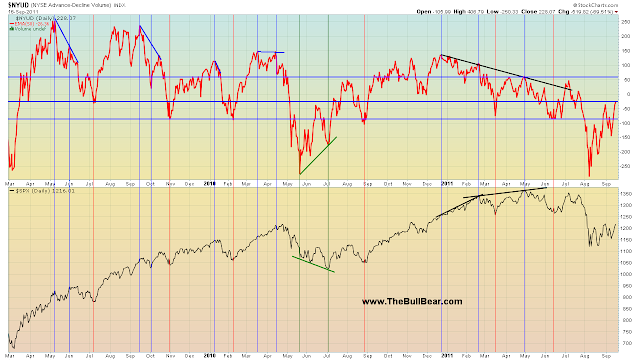 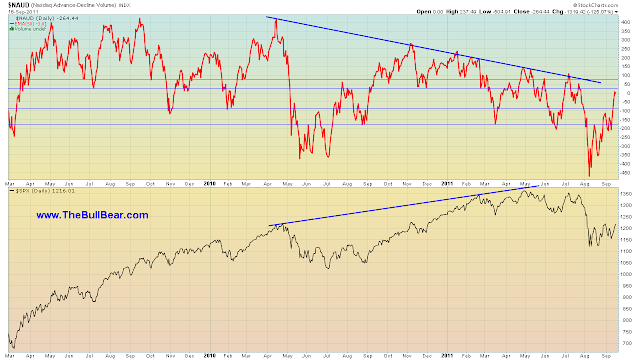 NYSE 50 Day Volume of Advancing Stocks has been showing persistant strength, a sign of buying pressure: 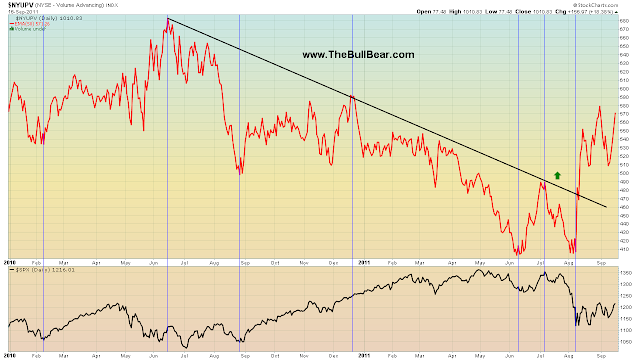 50 Day TICK has also been showing persistent strength, another sign of underlying buying pressure in the market.  It rose today in spite of the down day and selling on the Greece news: 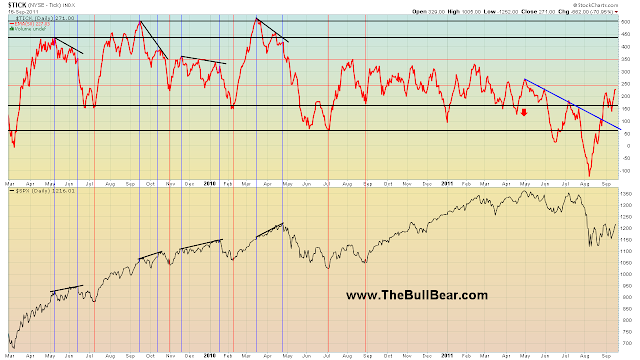 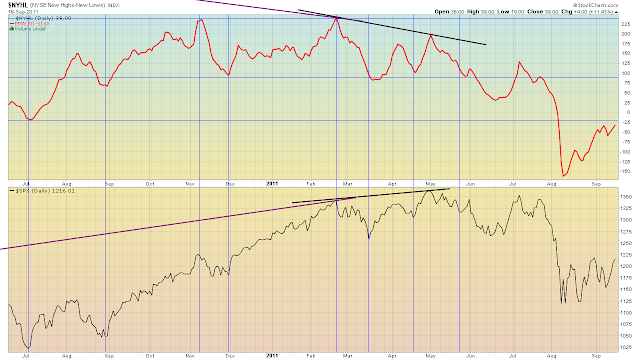 5 Day TRIN recently registered a cluster of readings typically associated with bottoms, but it has pulled back into the sell zone: 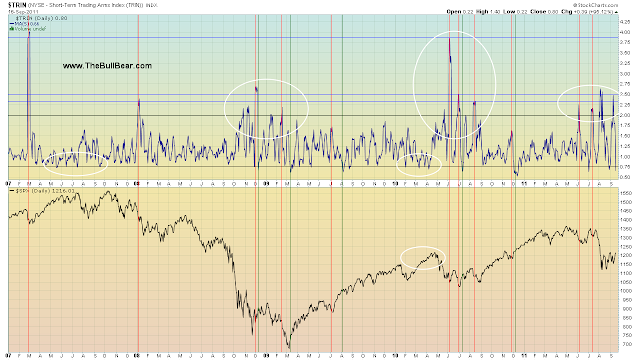 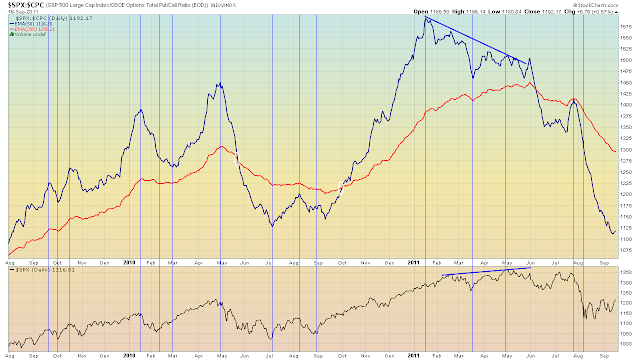 5 Day Put/Call ratio has started to roll over. It probably needs to fall to support before any real selling can begin. 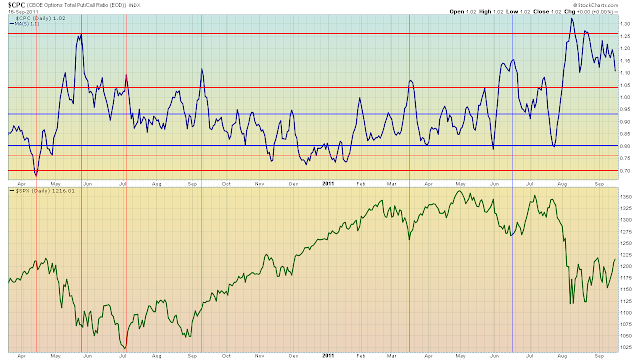 21 Day Put/Call ratio has started to roll over from a bearish extreme, which may be a leading indication of further upside pressure: 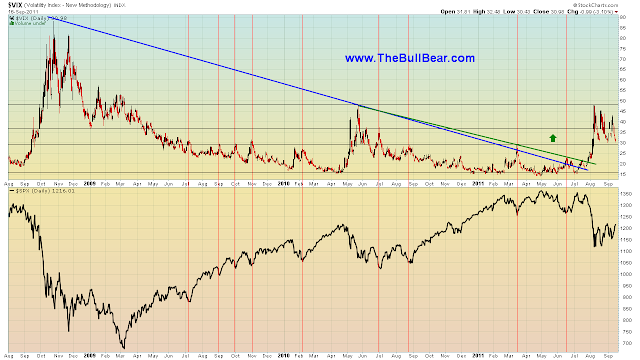 The purpose of a B wave is to convince a majority of market participants that the coast is clear and the decline is over.  We are not anywhere near that kind of psychology.  The overwhelming majority are still expecting "The Big One" to be imminent.  When the bears have given up and are tired of waiting or have been sufficiently squeezed out, then we can look for the next phase of the bear market to begin.  By my assessment we are not there and we are probably not even close.

In the short to intermediate term the risk remains to the upside.  It's difficult to ascertain the extent of that risk and the environment remains volatile rather than trending and should remain so for the foreseeable future.  I'm holding my long position for further gains over the next few days to a week.  After that I will have to re-evaluate the situation and determine the risk-reward parameters again.  Technical charts should tell us whether we will see an immediate big C of B back near the highs or a move lower first before the final C of B.

LIBOR and TED are still rising but in relative terms are no where near their 2008 crisis levels.  The credit markets appear to be in the very early rather than advanced stage of crisis, which may mean that markets have room within the scope of the situation for another rally back into major resistance or even back to the highs. 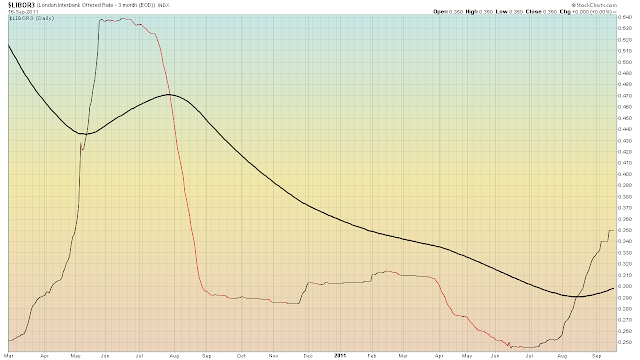 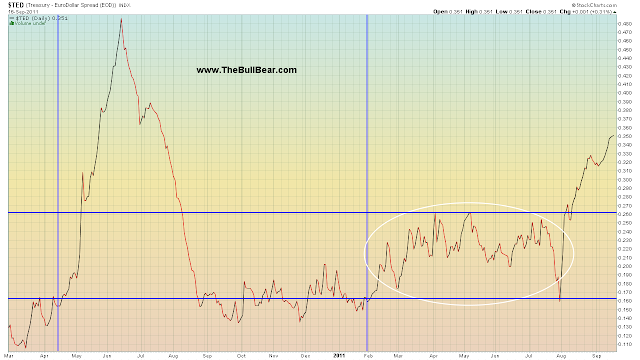 If you would like access to my reports with ongoing updates, commentary and the ability to engage in question and answer with Steven Vincent, you should donate for access to BullBear Traders at http://www.thebullbear.com/group/bullbeartradingservice.  Minimum donation for room access is $19.95.