There are significant signals in the current market that a crash or meltdown scenario could unfold sometime in the next 1-2 weeks. Crashes are rare events and nearly impossible to predict, but many elements that could combine to produce a financial market calamity appear to be present at this time.

The video below reviews the current technical condition of the major world stock markets.  In it I examine each index in terms of the relationship between price and the uptrends from March 2009 and August/September 2010, the April 2010 top and March 2011 low, the 20, 50 and 200 Exponential Moving Averages and areas of significant horizontal support/resistance.

Here's a direct link to the video: https://www.youtube.com/watch?v=OGVv2ODBQ-E

Every major stock market in the world is either hovering just above or directly upon or has already broken a critical area of technical support.  Ordinarily this might represent a major buying opportunity.  But the current market setup may be anything but ordinary.  In fact it may be quite extraordinary. 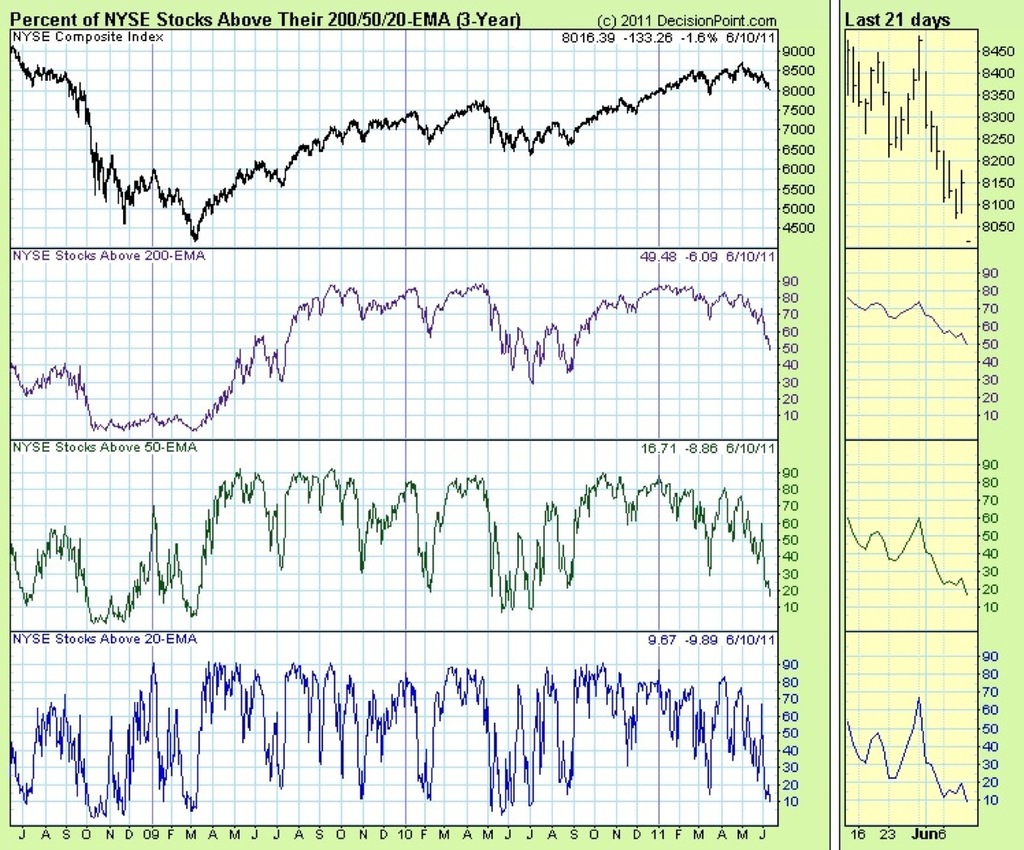 In spite of a very modest 7.5% decline over 6 weeks of trading (1.25% per week), Percent of Stocks Above the 20, 50 and 200 EMA have declined to precipitous lows usually associated with huge selloffs.  This is a prime example of the technicals leading the market lower.

Here's a closer view of NYSE Percent of Stocks Above the 200 EMA: Only 55% of NYSE stocks are trading above their 200 EMA after a minor 7.5% correction.  Even though market price has yet to take out the March low, the indicator has plummeted below its March low and is not far from its August 2010 low.  It's moving averages have crossed into bear market mode.  So on a long term basis nearly half of the stocks traded on the NYSE are trapped under long term resistance in a market that is showing historically weak buying pressure and significant and rising selling pressure.

There is very little fear in this market.  VIX has barely budged: Near market bottoms when fear is strong, traders switch to the use of ETFs instead of individual equities in order to insure that there will be adequate liquidity to exit the market in a hurry if things should turn ugly.  This is represented in the SPY Liquidity Premium indicator: In spite of everything we have discussed above, where is this indicator in relationship to its March low or April 2010 low?  Not even close to showing the fear usually associated with a bottom.

This technical evidence tells me that the selling HAS NOT EVEN STARTED YET.  And it is likely to get started soon.  There is MUCH more technical evidence that supports what I am saying here which has been published in a full report for BullBear Traders members.

When you have a situation where price needs to play catch up to the underlying technicals and market participants are not fearful and are still buying the dip, you have the recipe for a selling panic of some kind.

Today's weak bounce is probably just another selling opportunity.  Early action in Asia, US futures and the Dollar suggest that the correction may be over already:

This is wave C as I see it at this time.  2 of C was a large abc flat and (ii) of 3 of C may have been a smaller version with c falling short of a, making it a bearish running flat.

Volume on today's rally was POOR. Volume was lower than the 50 MA of volume, lower than any of the down days in the month of June. McClellan Oscillator gave a negative reading (though higher than the prior day) and the 50 EMA did not budge at all: Breadth Thrust Indicator FELL today, a particularly ominous sign, since if this were a real bottom of any kind there would be a breadth thrust signal of some kind: Many other indicators, such as Bullish Percent Index, did not even register a blip.  From what I can see the technical quality of today's rally was very poor.

Also, Dollar rallied into the close and Euro and Aussie gave up almost all their gains.  This has continued in the Asian session and Dollar is once again near 75.00.  Looks like iii of C down may have begun in Euro.  I am short more EuroDollar.

Comment by Ram Sharma on June 13, 2011 at 3:05pm
Thanks Steve. This is great coorelation aaong the world prominent arket that you identified. However, I don't see crash conditions because there is boo expected after QE3 (or soe other name) within June. Untill then arket si very unpredictable but should not create environment where institutions start selling.