As the S&P 500 hovers at its February 2011 high and the Dow toys with its May 2011 peak, many market participants are looking for an important top soon.  While I am certainly aware of some good arguments for a new bear plunge--in fact I've been favoring a major top in the first or second quarter of 2012 myself--I think it's worthwhile to examine the body of technical evidence that indicates that a run at the former all-time highs may be in the offing.

My "BullBear" methodology requires me to always evaluate the potential of both sides of a given market.  After establishing a solid list of potential scenarios, I examine the technicals of the market.  Frequently the underlying technical setup will align itself best with a particular scenario and that will then become my favored market view.  If the market technicals do not support any particular scenario, that's generally a signal that it's time to stand aside or hold an existing position.  By constantly revisiting the technical condition of the market, I can re-evaluate my market view and improve my chances of keeping on the right side of the market.

I'm seeing the emergence of a set of technical conditions that could have more in common with the 2003, 2009 and 2010 bottoms than with a topping scenario.  While at a shorter to intermediate term degree there are many technicals which support a correction of the run off the 2011 low, I am seeing significant indications in the longer term technicals that support an eventual move to the 2007 high.

When a cluster of significant Fibonacci relationships converge on a single point, it bears investigation: 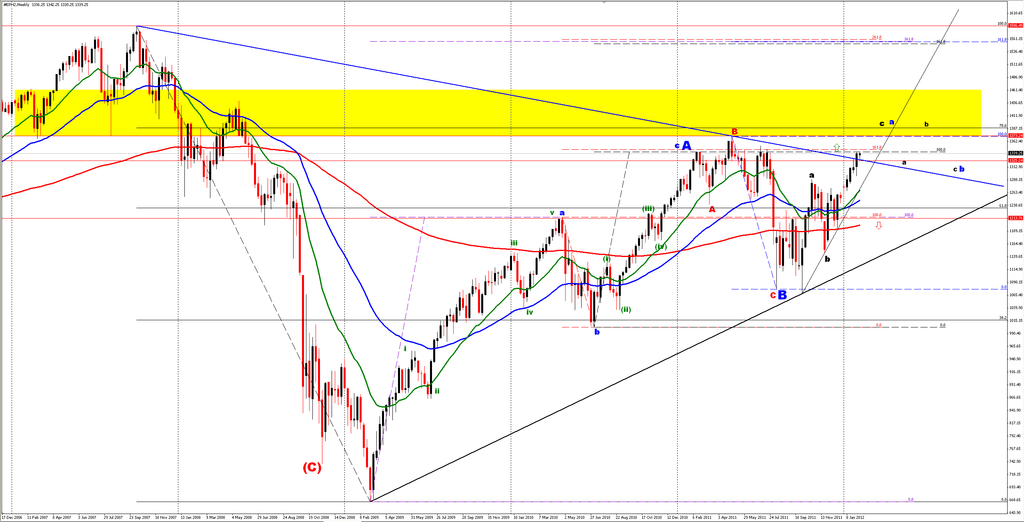 It's important to understand that markets are driven by supply and demand.  When potential sellers have exited a market, little buying pressure is required for price to rise.  If all potential buyers have already entered the market, there is little to prevent a price decline.  Technical analysis is the art and science of evaluating this supply/demand dynamic.

It's largely unrecognized that the July-August 2011 plunge was a market panic in technical terms, even though it was not ultimately that serious of a drop in percentage terms.  There was massive capitulation volume during the 2011 decline which rivaled the 2008, 2009 and 2010 market panics. Many technical indicators have largely recovered from extreme oversold/bearish conditions similar to those prevailing in the wake of the prior smashes which led to major bottoms.  The same technical indicators formed bullish divergences at the August and October 2011 lows as they did in the prior bearish episodes of the past decade.

The 50 Day Ratio of Declining Volume to Advancing Volume has corrected back into its long term support zone after spiking wildly as it did int 2008 and 2010: 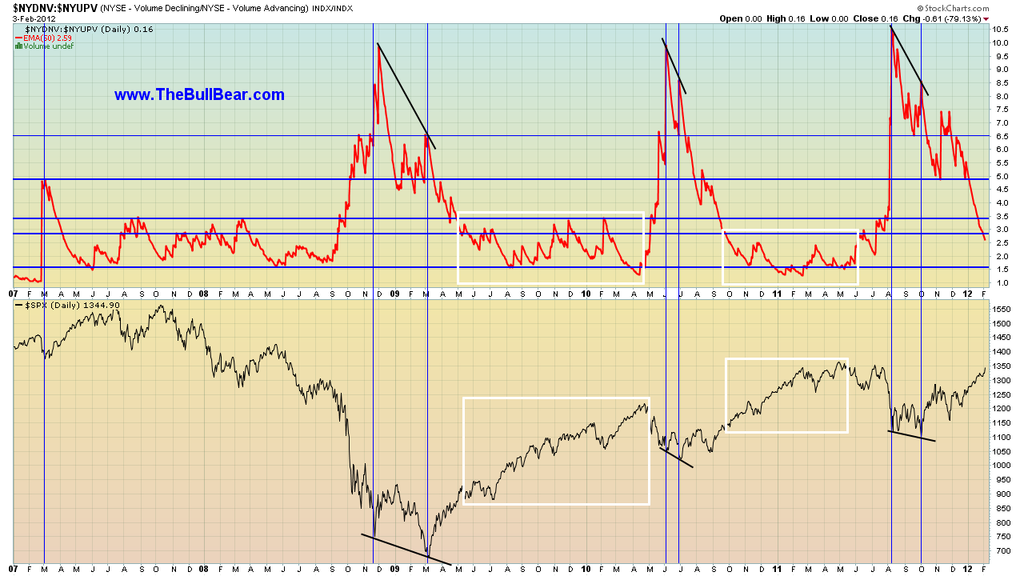 In fact the indicator hit higher levels during the 2011 episode than it did in the two earlier panics.  It also formed a bullish divergence, registering a lower high even as the market made a lower low.  Note that in the two prior instances, after the indicator re-entered its long term support zone, it then bounced sideways for some time as the market continued to climb.

We can see the same setup and behavior with regards to the 50 Day of Ratio of Declining stocks to Advancing stocks: 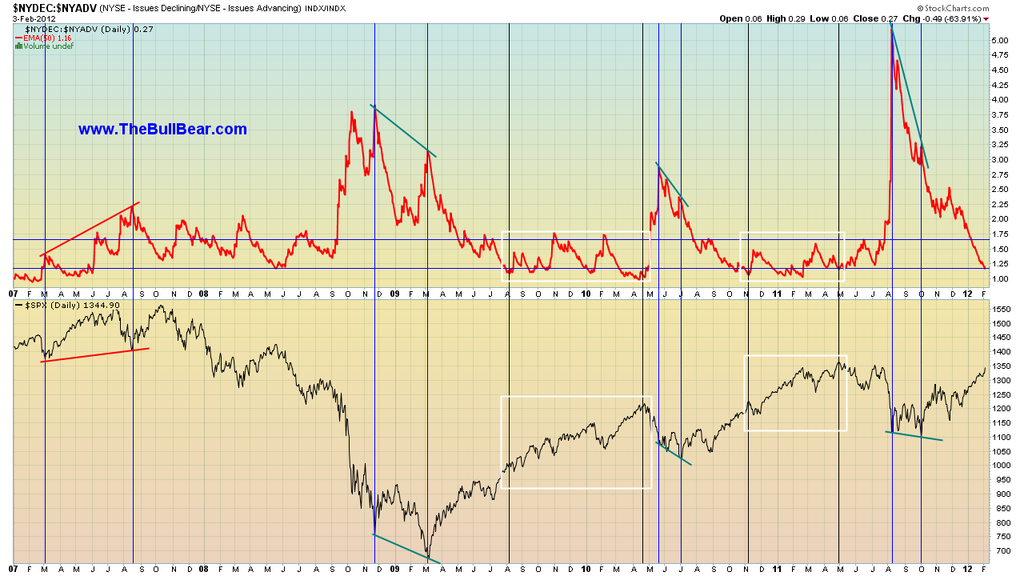 Note that this indicator completely blew away the prior readings, showing an historic intensity of panic

After forming a bullish divergence, 50 Day EMA of NYSE Advances-Declines has already broken above the 2011 highs: Nasdaq has taken out its 2011 highs and Percent of Nasdaq Stocks Above 200 Day Moving Average has also: The ratio of Equal Weighted SPX to Capitalization Weighted SPX is carving out a pattern very similar to the post June-July 2006 mini-panic: The market continued to grind much higher before the ultimate top was in place.  When we do top there should be a divergence, and it is notable that we do have a non-confirmation by the indicator at this time, though that happened in 2006-2007 as well and eventually the indicator caught up to the index.  The divergence at the top was rather dramatic.

Percent of Stocks Above 50 Day Moving Average is leading the move above the prior high as it did in 2009 and 2010, though it is in overbought territory from which an intermediate term correction would be normal: 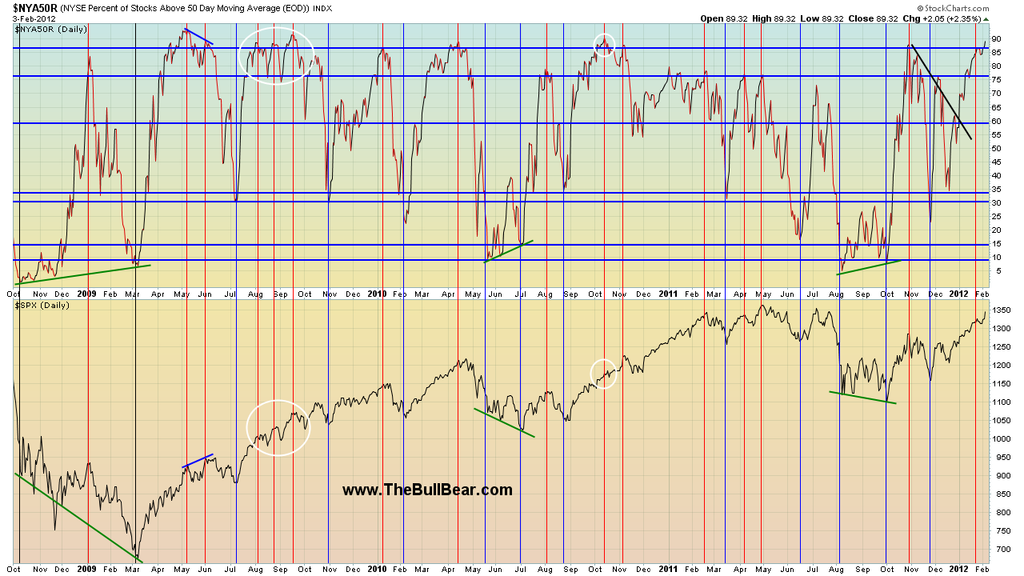 Nasdaq has taken out its 2011 highs and this has been confirmed by Percent of Stocks Above 50 Day Moving Average: 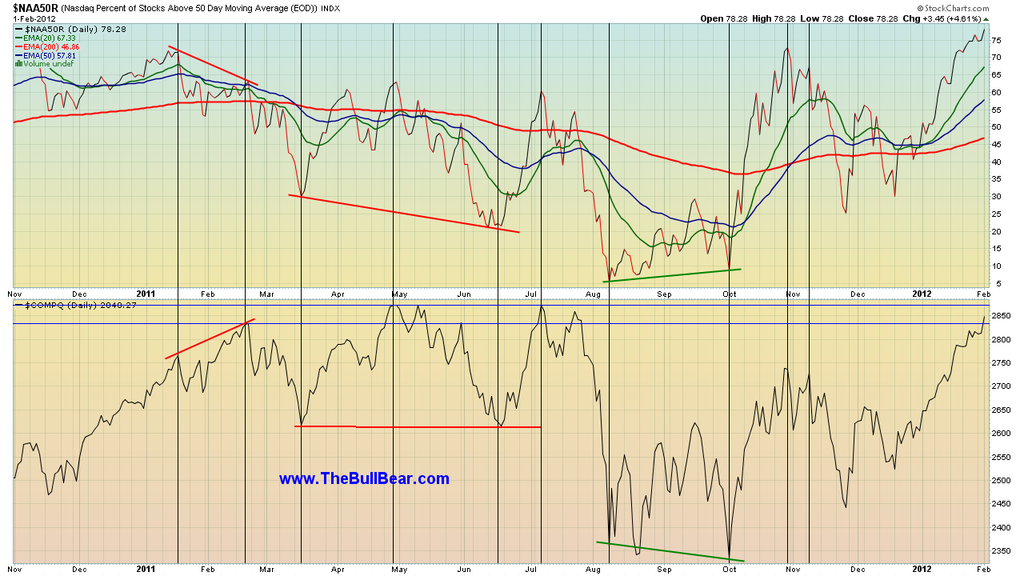 The ratio of Percent of NYSE Stocks Above 200 Day Moving Average exceeded the 2002-2003 lows and nearly matched the 2008-2009 lows and is performing similarly to the markets off those lows: 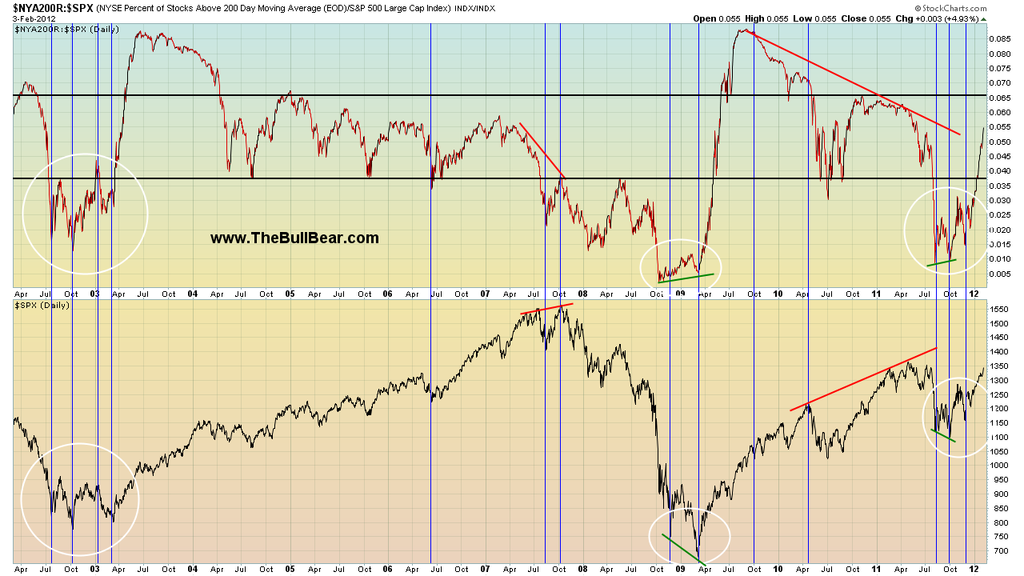 5 Day TRIN has produced a cluster of high readings even more persistent than those found during the 2008-2009 and 2010 time frames: 200 Day TRIN hit highs above all prior peaks and is still hovering in an area typically associated with major bottoms, not major tops: 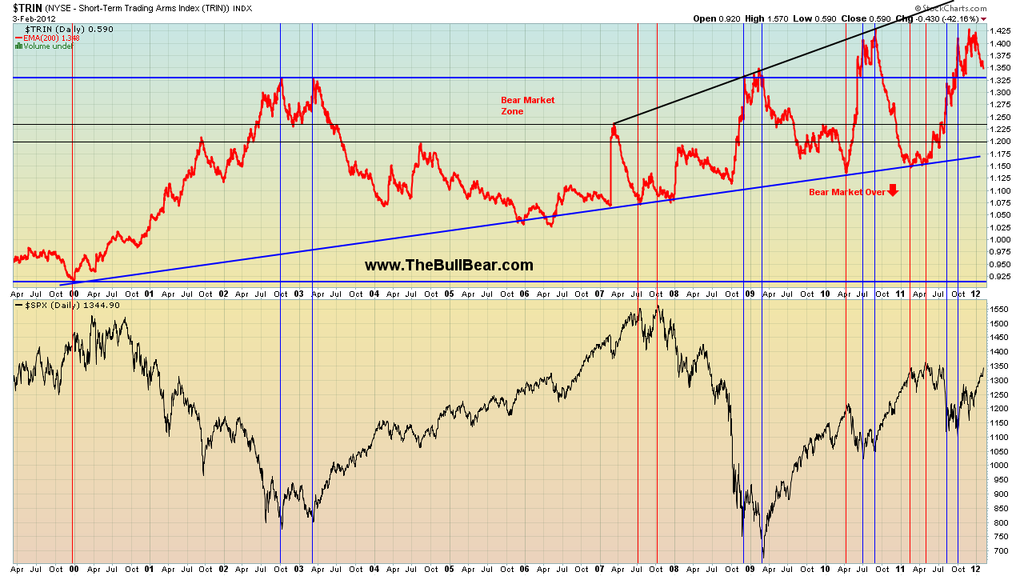 NYSE Summation Index made a bullish divergence and a low comparable to the 2002-2003 low and has performed similarly off the bottom. 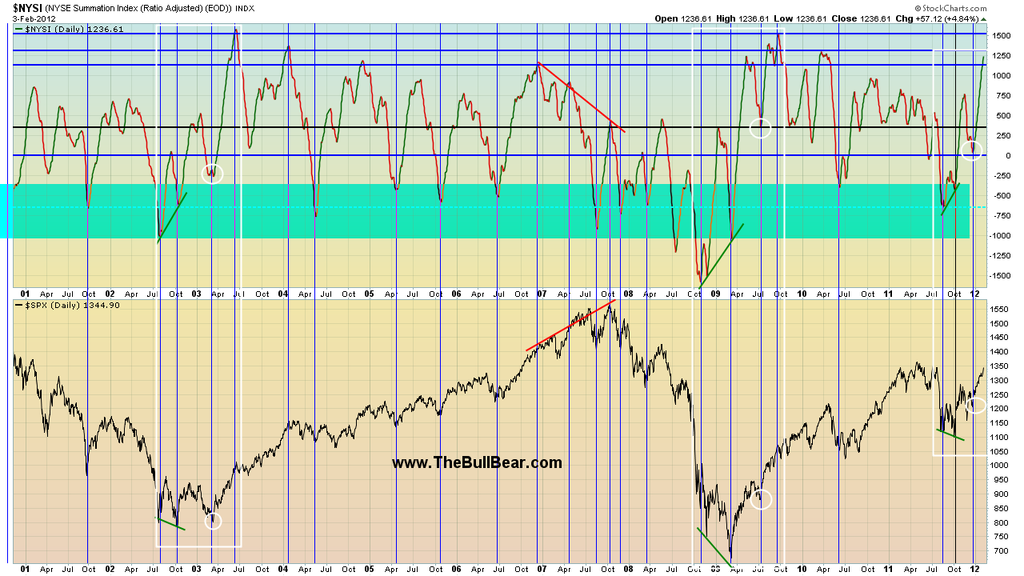 Nasdaq Summation Index has taken out its 2011 highs, confirming the new high in the index: There has never been a major decline with the 30 Year Treasury bond price trading in its upper band: While Volatility Index (VIX) has returned to its long term support zone, it could certainly bump along the bottom as it did in 2010 and 2011 for quite some time before the market eventually tops out: In summary, many long term technical charts are suggesting that the market is emerging from a long term deeply oversold/excessively bearish condition similar to the 2003, 2009 and 2010 bottoms.  Some long term indicators have yet to really begin to correct back to levels from which long term tops are made.  While there are other compelling arguments for a bearish resolution, the evidence here tends to suggest that the long term supply/demand balance in the market favors the bull side of the market for the foreseeable future.