SAMPLE REPORT: Did a New Bull Market Start in November 2012?

Did a new Bull Market in US equities start in November 2012? In this report I will focus on the technical evidence which supports the view that the S&P 500 has either completed the final E wave of the triangle bear market that started in 2000 or started Major Wave (3) after completing the bear market with a C wave low in March of 2009.

Let's begin with a review of the market action since the 2009 bottom.

(New readers should note that for the sake of simplicity the following review of past analysis does not include any of the technical indicators that I used in association with my Elliott Wave analysis.)

I was long and bullish continuously from March 2009 until April of 2010. My long term read on the US equities markets was that the 2009 bottom marked the end of a large expanded ABC flat Major Wave IV correction and that a Major Wave V bull market was under way. While there are some complicated issues with the proposed Wave 3 internal structure, there is a five wave pattern on the chart. In May 2011 I turned intermediate term bearish, closed my longs and went short for what I viewed at that time as a large correction within a bull trend: When the market dropped below the proposed Wave (1) high and the blue uptrend was broken, the bull market structure was disrupted and I began to look at alternative wave structures to account for these changes:

At this time my primary view of the market's long term wave structure was that we were in the beginning stages of the final, E wave bear market that would eventually end the long term bear that started in 2000.

In September 2011 I recognized that the market was very oversold on a long term basis and began to look for a very large rally, one that would travel "higher than you think", even back to the prior highs:

Indeed we got just such a rally, and near the top in March 2012 I called for a C of E wave decline that would end the long term bear market: I noted the emergence of an apparent sideways bear channel, which reinforced the notion that we were in an E wave bear market:

And indeed the market did top, but the initial decline did not take the five wave structure of a C wave bear move but rather a sequence of 3 wave structures. I therefore projected an A wave bottom to be followed by a B wave rally and then a larger C wave decline:: 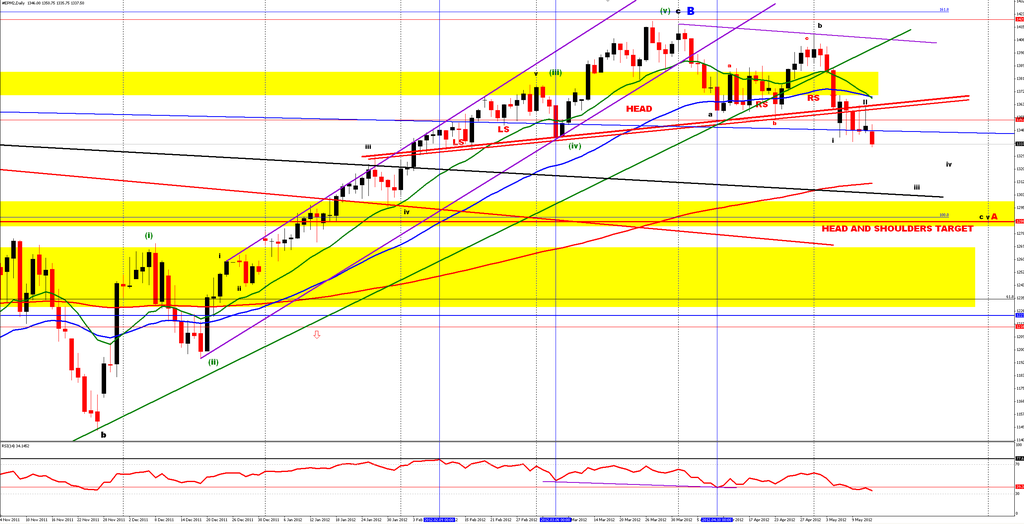 This further supported the conclusion that the E wave was taking the shape not of a zigzag, but of a complex triangle (E waves ending triangles are commonly triangles themselves). I called for a B wave rally off the June low: The wave structure had become extremely complicated at this point, with overlapping wave segments going back to the 2010 top. At this point there were many possibilities, but my take was that the overall context was generally bearish.

During the months of June-July 2012 there was an extensive period of volatile chop which I interpreted as most likely a B wave triangle pause before a C wave down: This proved to be the first time I missed a significant turn, as the market continued to rally, forcing me to close my shorts at a small profit and missing the rally from the June 2012 low. I stayed on the sidelines in cash from July until the top in October. The wave structure had now become even more complicated, with yet another set of overlapping waves:

At this point we had a seriously convoluted Elliott Wave structure which made no sense from a bullish perspective and likewise very little sense from a bearish point of view. I was correct that there would be another top and shorted again. A break of the trend channel off the 2011 low seemed to hold the promise of substantial downside. I correctly inferred that there would be a B wave bounce to test the channel break, establishing a lower high::

We did make a short term top at resistance and appeared to start another leg lower with the potential for a significant break of support:

Recent price and technical action has challenged the validity of the proposed wave structure, however. A reassessment is required at this juncture

2012 was certainly a challenging year for traders with far more volatility, a lack of correlation among and within asset classes and conflicting technical signals. It was a period in which technical setups which had previously appeared at virtually every turn failed to appear or failed to work as they did in the past.

While the market continued to make higher lows and higher highs, it did so in the context of many technical features which are not consistent with a bull market but rather with a corrective phase or a sideways bear market.

In retrospect we now know that the 2002-2007 market was a Major (B) wave in a bear market.  We might be tempted to think the market will repeat that pattern with the current volatile rise giving way to a blowoff move that sucks investors into another major top.  Indeed, that is one scenario which I have been tracking:

But markets are rarely that repetitive and this particular market is acting very differently than the prior big wave up.  The context is different, too.  Since 2007 we have seen four big volume capitulations that have potentially cleared the market of long term sellers: Note also that the 2012 declines engendered far lower volume and the October 2012 decline came on volume that was relatively on a par with the surrounding months.  Overall market volume has been declining steadily as well.

Let's say for the sake of argument that we are in an impulsive bull market.  Is there any way to show that on an Elliott Wave chart?

We are in extremely odd times the likes of which we have never before seen.  Quantitative Easing to infinity and beyond!  Is it possible that monetary intervention has skewed the charts in such a way that perspective has been shifted like a funhouse mirror?  If we could correct for the QE effect, what would we see?

I used Photoshop to deconstruct the weekly futures chart and with some minor tweaks I was able to produce a chart that may represent the true picture of the market adjusted for QE:

I simply kept the relative structure of the market wave segments intact and removed the upward bias since 2010.  The resulting chart is a normal, satisfactory Wave (D) followed by a triangle Wave (E).  A breakout is now in progress.  According to this chart, a new bull market started in June or November of 2012.

If the US stocks markets are in a new secular bull, are there other charts that confirm this? Post-2010 we saw an ABC apparent Wave (2) correction followed by a five wave uptrend and another minor correction to support with a breakout in progress.  This looks like a real bull market. After a strong uptrend into 2010, there was a clear 3 wave ABC correction followed by a very strong rally to new highs.  A strong breakout following a minor correction appears to be beginning now. A strong five wave move ended in 2010 and was followed by an ABCDE triangle.  A strong breakout occurred in December 2012.

All of the above appear to be valid bull markets.

Are there other markets which also validate the thesis of bull market initiation?  I think we can say that Japan's Nikkei is a market that recently completed a major long term bottom.

Nikkei appears to have completed a Major Wave (2) correction in the form of a falling triangle between 2009 and June of 2012:

This is an exceptionally bullish chart.  The orthodox Wave (1) high is being taken out now.  RSI readings are the highest since the bottom in 2009.  I think there is a very good chance that the multi decade bear market in Japanese stocks is over.  This could be a generational buying opportunity.

Is there any technical evidence supporting a long term bottom and a bull market initiation? I thought that this long term break might be retested during a final market decline, but there is no signs of that yet.  Note there is a five wave pattern in the drop off the high.  I have been saying for years that when the long term bear market ends we will know since this chart will tell us that the pattern of rising selling pressure has abated when the trendline is broken and we make a lower low.  That has happened.

Most ratio charts bottomed in August-October and have been rallying strongly, showing good market breadth and strong accumulation of risk even during periods of market price weakness: Weekly indicators have started to take on a definitely bullish configuration with lots of room to run to the upside before  becoming overextended: 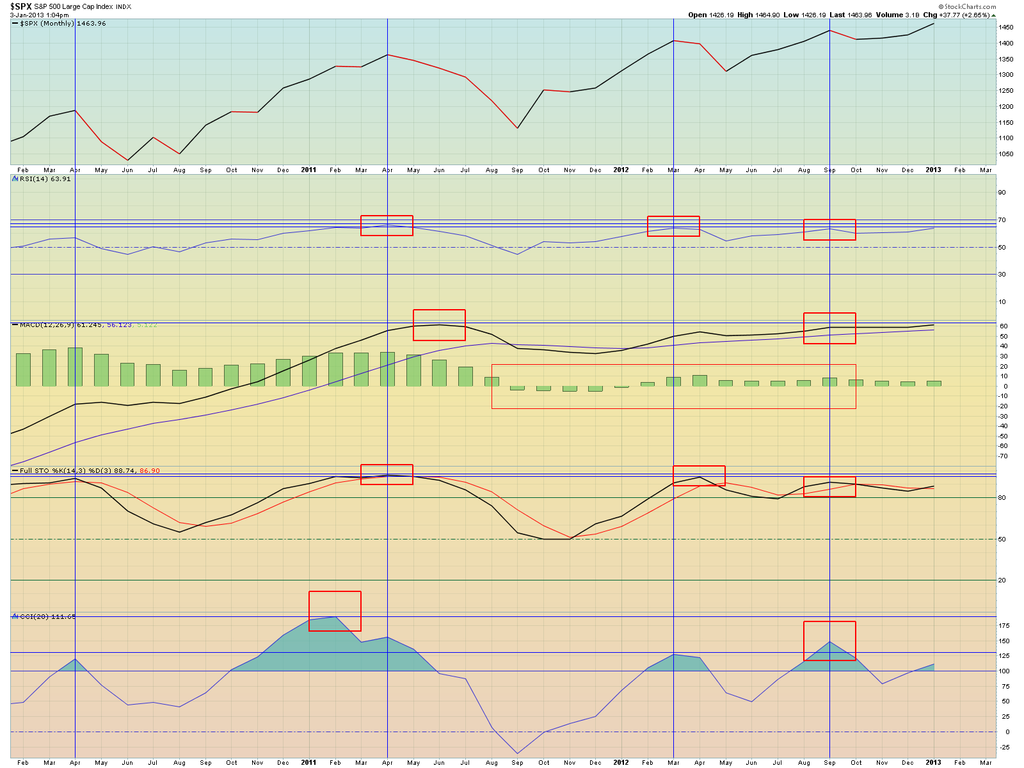 Percent of Stocks Above 200 Day Moving Average can easily take out prior highs and negate the pattern of bearish divergences if the market continues to see January strength: The 30 Year Treasury Bond is making its first lower low and lower high since 2009 and breaking its 200 EMA as it falls out of a rising wedge: If money does start to exit the Treasury market now that is a major catalyst for a bull market in stocks.

While there are a number of bearish daily divergences on the technical indicators I follow, these can easily be taken out by even a moderate follow through to the initial January thrust.

Note that Major Wave IV is labeled as an ABC correction here, though in the QE Adjusted chart it may be labeled as ABCDE. There is a convergence of every Fibonacci projection on the chart to the zone of Dow 18,800. Presumably this Major Wave V bull market will be driven by world monetary debasement as the problems of Western economies are kicked down the road, and that the correction of the entire five wave sequence from the 1932 low would involve the required economic, social and political adjustments. Apparently bears will have to wait for a while for the Apocalypse.

Nothing is more bullish than a failed bearish setup. SPX showed a rising wedge in a bear channel on declining volume and deteriorating breadth with long term technical divergences. I was properly long term bearish under those circumstances from May 2011 through 2012 (while appropriately bullish at the intermediate term bottoms as well). Adjusting for monetary action and QE, we can see that a period of sideways action has potentially ended with a breakout. The current market juncture may be the functional equivalent of the 1982 bottom: In order for this bullish analysis to be negated, we would need to see a rapid reversal of recent gains and technical action which corresponds with the price action. My current take is that we are likely to see a period of consolidation or perhaps a minor retracement in the early part of earnings season. If this analysis in on target, buying opportunities will be scarce as the bull market gets in full gear.

The alternate bearish scenario is still on the table and needs to be monitored:

Any sustained move above the upper red rail would tend to challenge this scenario.

At this time I am inclined to be looking for a long term buy entry point and I am particularly interested in buying a pullback in Japan (subject to some due diligence on the fundamentals). Again, a rapid reversal could put the bearish scenarios back on the table. But my conclusion at this juncture is that the technicals tend to support a bullish rather than a bearish primary long term orientation.