(Excerpted from the most recent BullBear Weekend Report)


In last week's BullBear Weekend Report I called for some profit taking and indicated that the market was likely set up for a pullback. This week the market continued to trade in a sideways pattern while the technical conditions suggestive of a correction deepened. As we go into the mid-term election and the November FOMC meeting, my long term stance continues to be bullish but my short and intermediate term stance is neutral.
This week I upped my profit taking signal to 1/2 from 1/3. Here's the BullBear SPX trading history for 2010. 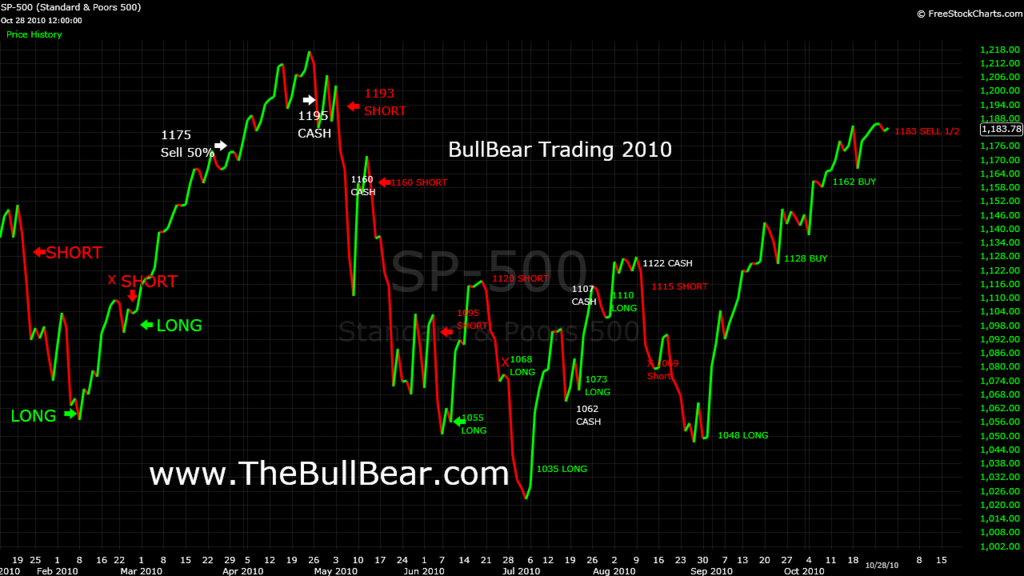 There are many potential scenarios for the coming week. Will the Fed exceed or disappoint expectations for QE2? Will there be surprises in the election? Will news break on the mortgage crisis? It's crucial to remember that the news itself is meaningless. We are only concerned with the market's reaction to the news. And that reaction will be shaped by its technical condition and overall setup going into the news event. Later in this report, I'll look into the market's technicals to divine its inner message so that we can be best prepared for what comes. But first I will indulge in a little bit of speculation about the current psychological and sentiment setup revolving around the Fed and QE2. And when I say "setup" I mean that in the classic sense of the setup in a criminal confidence game. We shouldn't lose sight of the fact that that is the context within which we are playing when we enter into these "markets".
THE FED AND QE2
This may be the most anticipated FOMC meeting in history. And the markets have bet heavily on a certain outcome with little fear of loss. Sounds like a classic con setup to me!
Here's a range of setup/reaction possibilities with regards to QE2 on Wednesday:

There are many other permutations of the above. Frankly, I don't think it's really possible to know with any bettable certainty at this time. I strongly suspect that a selloff is coming and it may come as a "sell the news" reaction. Technically, there is good evidence that the market is waiting for an excuse to do some selling. There may very well be an initial pop higher first on a "satisfactory" QE2 plan followed by a sharp selloff.
But my "gut" (sometimes you need to check your gut intuition which is the wisdom of accumulated experience) is telling me that the Fed is going to disappoint the market to some degree. Here are some of the possible "disappointment" scenarios:

1. Fed postpones QE2 for later date either in full or partially.
2. Fed downgrades QE2 to an incremental process over a longer period of time.
3. Fed packages a limited asset purchase program with other measures such as decreasing reserve requirements, decreasing or eliminating interest paid on bank deposits at Fed or charging a fee to hold deposits at Fed.

My gut says that there is going to be some kind of surprise. Economic data of late has not been so horrible as to justify a "shock and awe" program of the immediate printing and wanton tossing of trillions from helicopters. There will be the fresh political pressure of a new, more conservative majority in Washington and the popular sentiment that that represents. Market history is rife with incidences of prices running up into an event and then plunging afterward, particularly in a heavily traded market such as this one.
Let's assume that "They" (you know, those guys) have an agenda. What do they want?

There's lots of talk and a general consensus that Fed purchases of Treasuries will have little or no effect on the economy. If that's the case, what's the point?
The April-July panic was whipped up by the media and it drove investors into Treasuries providing a market for inside elements to exit their positions. As the common investor panicked into bonds, the Chinese, PIMCO and others were selling out. Since fear is no longer the modus operandi, it seems obvious to me that QE2 will serve to create a bid using the public credit card to gradually ease the insiders out of their positions.
I also think that "they" may have purposefully set up precious metals for the smackdown. Is it likely that they will hand the gold bugs the ultimate fantasy hyperinflationary scenario on the proverbial silver platter? The setup reminds me of the March 2008 gold peak on the night of the Bear Stearns collapse. That became a big sell the news event. Hyperinflationists are literally banking on the Fed funding the precious metals moon shot. The irony is incredible. The logic is that "they" have painted themselves into a corner and are now powerless to do anything but commit public ritual suicide and admit that their system is bankrupt. This has become an ingrained assumption. Perhaps this will all come to pass as anticipated. But as a contrarian I think it is important to engage in at least some healthy skepticism here.
I think the master manipulators would want to engineer a scenario that would really crush the metals and only temporarily ding equities while also giving temporary support to Treasuries and the US Dollar. What course of action would accomplish that?
The hyperinflationary scenario involves the creation of huge amounts of new money. But there is already an enormous money supply that is not being used in the economy. The Fed may target means for injecting this accumulated, pre-existing old money into the economy rather than creating large amounts of new money. If that is the program they announce on Wednesday, the short term action (1-7 days) could be overall bearish but in the intermediate to longer term the market would likely trade this as bullish for the economy, stocks and most commodities and bearish for precious metals. Treasuries would likely pop at first and then decline gradually with Fed purchases slowing the decline.
That's my best guess at this juncture. It is an educated guess, not a trading plan. It's healthy to explore some of the less accepted scenarios. Perhaps the mental exercise of envisioning the possibilities will keep us flexible and open minded as the reality develops in real time.
MORTGAGE BANKING CRISIS AND MID-TERM ELECTION
The other fundamental news factor that is gestating in the background is the mortgage banking crisis. All 50 State Attorneys General have joined to launch an investigation of the home foreclosure process of the banks, some have sued banks for fraud and most of the banks have put a halt to foreclosures altogether. This feels a lot like the proverbial "first shoe". It seems likely that we will hear the sounds of many more shoes dropping after the mid-term elections. Newly elected state officials may be encouraged by the popular mandate to "get the bankers" (and certainly banker bashing may become the road to higher office in the years ahead).
In this context homeowners will likely stop paying their mortgages and their creditors may get squeezed. Ultimately we may be facing a housing sector nationalization. The lame duck Congress, with nothing to lose and well paid consultant positions to gain, may play along with yet another concocted crisis and bailout scheme.
Should this come to pass, it may be enough to change the current market dynamics substantially, at least for a time and to the same degree that the European Debt Crisis did from April-July.
11/02/10 UPDATE:

Today we saw a move higher within the recent range but the highest close in the rally. It wasn't another doji, but it wasn't a decisive breakout either. 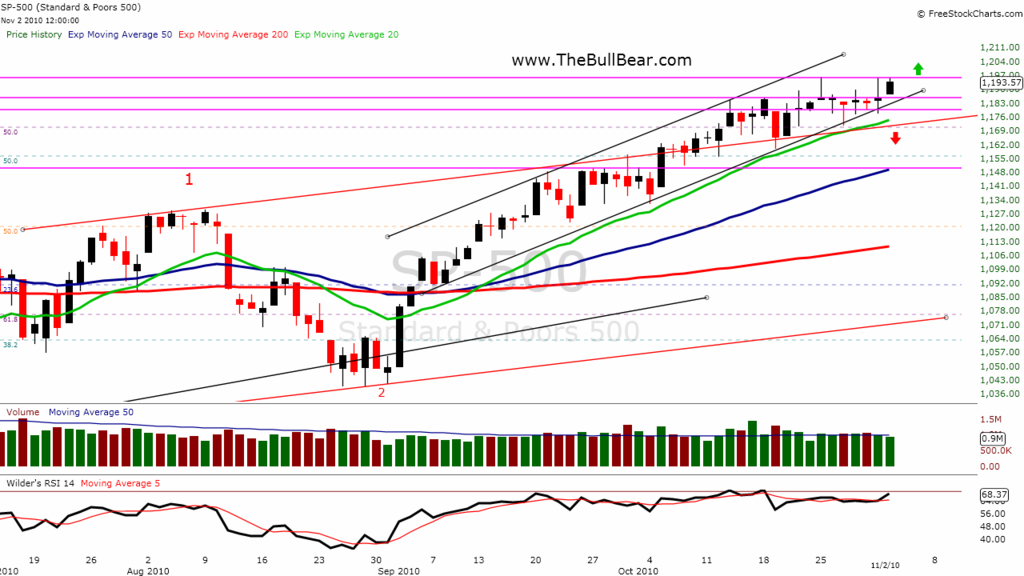 The good news is that the wave count on this rally may be getting clearer. The chart below shows that we may see the final leg in a wave 5 ending diagonal soon. 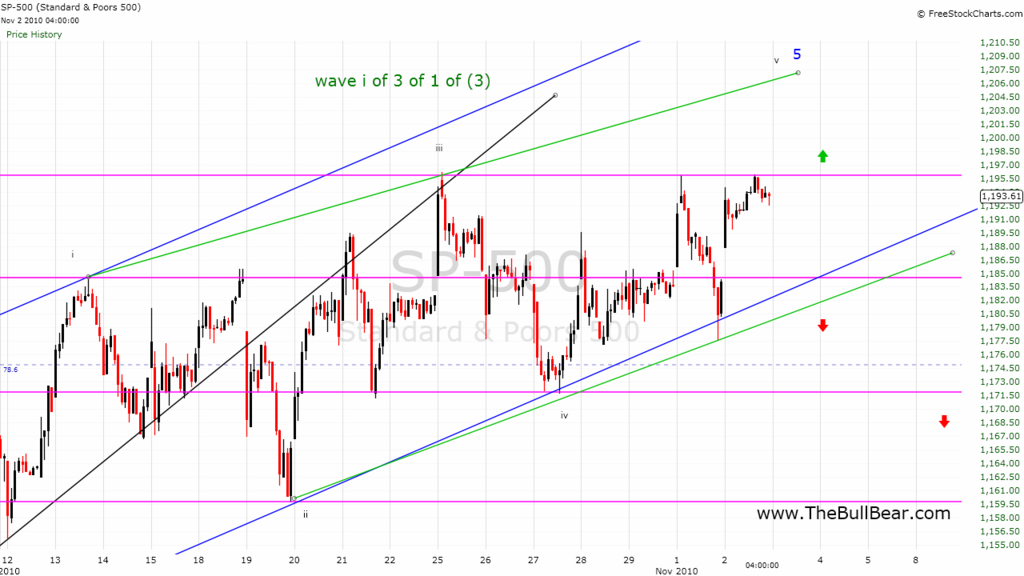 It's possible that the wave v of 5 completed today with a test of the recent high. There's no law that says it must contact the upper rail. However, we may see a pop on the Fed news that contacts the upper rail in the 1206-1208 zone that caps the rally with a "sell the news" reversal.

Today the Euro did pop above its channel, which is bullish as long as it does not promptly reverse back through the formation in a failed breakout. Overnight, we do have the Euro moving higher and then reversing back to test the 1.40 area.

The breakout came out of a very choppy back and forth move up in 5 waves. Overlapping waves of this kind are rarely indicative of an impulsive move, unless it's some kind of leading diagonal. In any case, the battle lines are fairly clear. The next resistance is in the 1.4075 area and a strong close above that would send a bullish message. A failure of 1.40 and close below the black uptrend...approx. 1.3950...would be bearish.

Nasdaq 100 futures chart shows a fairly clear completed 5 wave move up and a rising wedge pattern near its apex.

The technicals still tend to suggest a pullback is coming, although there was some improvement today. Overall, we have to say this is "too close to call". If you are long, you may as well stay long until the market gives a clear signal. I don't think we should be thinking short at all at this time. We should be thinking about being ready to buy when the market finally does pullback for a 23.6% to 38.2% Fib in an abc correction.

Good luck! Wednesday should be quite interesting. I will be glad all this Fed watching will be over. I really hate trying to trade around these interventionist news events. This is not free market capitalism! Grrrrrrrr.....