Is a New Long Term Bull Phase in Stocks Already in Progress?

As regular subscribers to the BullBearMarket Report know, I have been tracking the onset of a long term Secular Systemic Shift since the last bull market began in 2011.  In 2018 I began pointing towards 2020 as the year that "Shift happens".  I think it's hard to dispute that, indeed, 2020 has proven to be a watershed year.

At this time we are less than a month away from the November 3 U.S. election and there is little doubt that the results will largely determine a tectonic shift in one direction or another.  In fact, shifts of a secular and systemic nature are always marked by major political and geopolitical upheaval, revolution and war.  The presence of such upheaval in the political and social superstructure is confirmation that a process of fundamental change is in progress in the economic foundation.

History never repeats but it often rhymes.  Each secular systemic shift has its own characteristics.  Since the last shift, which took place between 1929-1949, had the characteristics of the Great Depression, Fascism, Holocaust, World War and the Atomic Bomb, there is probably a bias towards expecting a similar outcome in the current historical time frame.  And it's certainly not impossible that we may be faced with transiting a similar epoch now.  But it's important to remain open-minded towards the possible outcomes.

In the context of Financial System analysis there has been a strong current which is philosophically married to expectations for an eventually disastrous outcome.  In 2012, at the start of the last bull market, I identified this trend as "Disasterism", of which there are two main varieties, Inflationism and Deflationism.  Both emerged from anti-Keynesian monetarist intellectual circles that placed the Federal Reserve, central banking and monetary policy at the center of a theory that, one way or another, had to inevitably result in a deep, dark disaster.  I think that we have seen periodic crises that have of course been linked significantly to money supply and monetary policy.  And while the 2007-2008 and 2020 period have certainly been ugly and scary, I don't think we can really say that they rise to the level of the historical events of 1929-1949.  And again, I'm not saying that our current circumstance won't devolve to a comparable level.  As I have said before, we are in a state of defacto war with China and a defacto Civil War in the U.S.  There is little doubt that epic sociological and economic changes are in progress.  But I do think it's important to realize that the dislocation and pain associated with the current process of transformation may end up being brief and less impactful than might otherwise be expected.

In the last report I touched on "Peak Financialism" and the rise of the Financialist economy as a necessary and inevitable stage of late Capitalism.  Financialism became necessary as the capacity of economic value generation via the productive processes of Industrial Capitalism began to fall off sharply.  The Financialist epoch can be logged as beginning with Nixon's termination of the US Dollar gold standard in 1972 and reaching its peak with the Coronacrisis Bailout of 2020. In many ways, that period was simultaneously the peak of Capitalism as well as the transition to the next epoch.  And the next epoch is marked by the economic and societal characteristics of Information.

The period we are now involved in is not a period of transition from one kind of Capitalism to another, but rather from Capitalism to an Information-theoretic paradigm.  The contending parties are largely unaware of the underlying forces that are describing the terrain of battle.  "Conservatives" think they are fighting for a return to past glorious conditions and principles.  "Liberals" (in many cases, really Marxists) think they are fighting for progress towards a utopian future that they can mold to their ideals.  Neither side really has a grounded idea about the fundamental technological economic reality that is emerging around them.  Nonetheless, aware or not, the pieces on the board have to make their moves and the drama has to be played out.  Historical forces will have their way.  It is the details of the outcome that are in doubt.

Back when we could legitimately say that markets existed, we could say that market forces tabulated all current and future information in the form of prices and that the emergent patterns of those prices told us about the future that the markets were anticipating.  Today, we do have to question whether or not financial market forces really exist due to the extreme interventional policies of the central banks.  But so far, many technical analysis methodologies still seem applicable and still yield good results if applied objectively.  And my current read of the technicals is that a major new bull phase is either in progress or beginning relatively soon.

If a major new bull phase is beginning now, there are many who will say that it is not "real" and that it will only represent monetary inflation and not genuine economic dynamism and growth.  That may very well be the case.  But on the other hand, as I will detail in this report, economically sensitive areas of the financial system are flashing the end of long term bear phases and showing the potential for a shift to outperformance after a long period of underperformance.  This suggests that a more optimistic outcome than most are predicting is emergent and that many widely-held assumptions about the characteristics of the secular systemic shift may be erroneous.

The very long term monthly chart of the Dow Jones Industrial Average is currently trading near an all time closing high and very close to the upper rail of its long term trend channel. 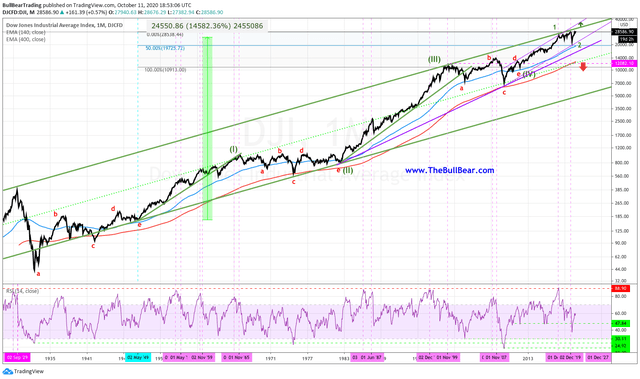 To access the full report you have to become a member.  If you are a new member you can get your first month for free.  https://www.thebullbear.com/notes/BullBear_Traders_Access

When I click to continue reading full report, it's not there. Any tips? Thank you.