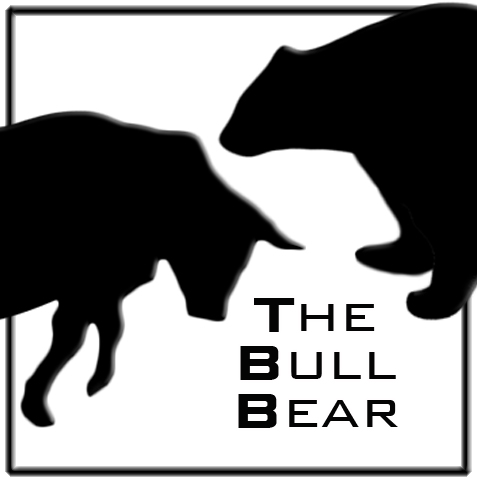 Here is the latest pick from Faizan's Stock Picks

"Interphase Corp. (INPH) is a technology company which specializes in computer peripherals. As of now it is trading at $5.20 a share. Interesting formations are appearing on INPH's chart which I would like to point out.

The following chart is a daily chart for INPH with an Ichimoku cloud overlay. 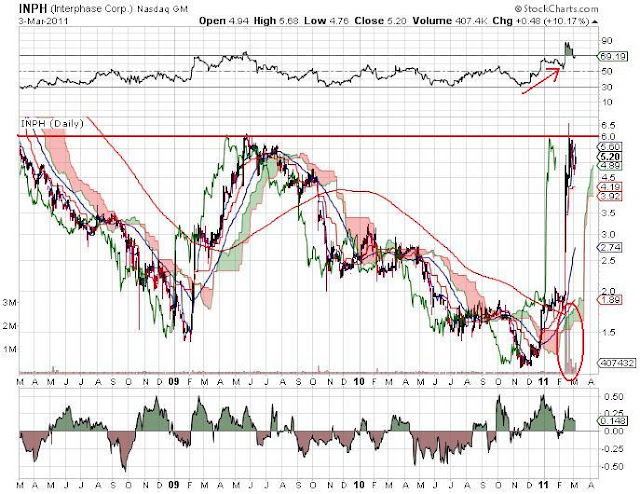 First thing to notice on this chart is that starting May 2009 INPH established a continuous downtrend which finally lasted in November 2010. During this 19 month time period the stock lost more than 80% of its value. At that time the stock was highly oversold, and was ready for a good upthrust.

Then, starting December 2010 the stock made some rapid upward moves and after about 1.5 years it finally broke above  the Ichimoku cloud on incredibly high volume. Supporting this increase was a sharp uptrend in the stock's RSI which is a very bullish indicator. Also, at the tip of this uptrend the stock broke a very significant resistance level at $6.00 leaving no overhead resistance on this 3 year chart. This clearly shows that the current tape formation for this chart is very healthy and we can expect a continued upward trend for the near short term.

Now lets look at the another chart for INPH. 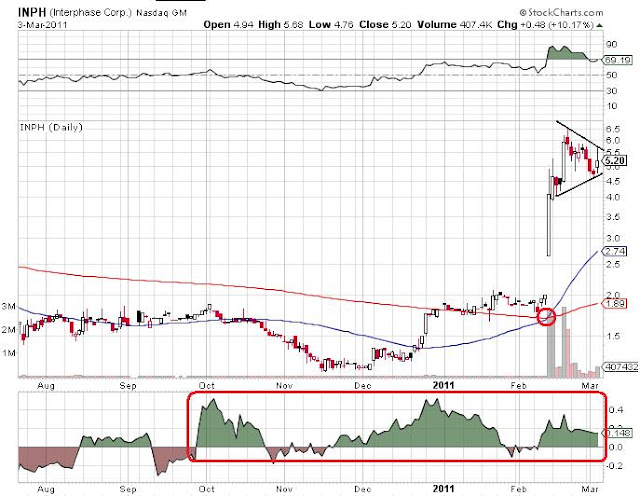 This is a one year daily chart without the Ichimoku overlay. On this chart we can see that after the recent high at around $6.50 the stock is now trading in a narrow symmetric range. A breakout above this range will indicate another bullish run, while a breakdown would mean a correction. So this chart is worth keeping an eye on as well.

Also, notice that recently the 50 day and the 200 day moving averages crossed over indicating a bull. Combined with that the Chaikin Money Flow indicator shows that the that the stock has remained above the crucial zero line for most of the last six months indicating that the stock is fueled up now and is ready for a ride. (For more on volume indicators read The Trader's Book of Volume: The Definitive Guide to Volume Trading

Finally to decide on good sell points we shall take a look at the following all data chart for INPH. 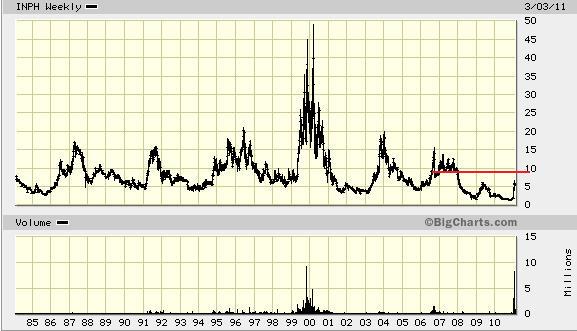 It can be seen from this chart that the next resistance level(from 2007) is around $9.00-$10.00. So, this can be a good sell point for mid term traders. This is just a casual advice. Rely on your own intellect to choose a sell point, because finding a good sell point is more of an art than science.

(Being a pure technician I usually avoid listening to news about stocks. But going against my own beliefs I would like to throw in one: Interphase Corp's directors Strunk Christopher, and Myers Michael collectively purchased 9000 shares of INPH on 15th and 18th February.)

So to sum up I believe INPH is presenting an excellent buy opportunity, provided that the stock breaks above the narrow trading range (which may take a few weeks). That's all I have for now. Don't forget to subscribe for feeds. Have a great weekend!"

Sorry, did not revisit this page sine 5/19. Could have profitted handsomely on your kind recomendation of RMTI.

The TOO SMART Person will get it one day and thinks that day has arrived.

I have stopped running this stratgies on 5/19/11.   The statistic as of 5/19/11 is up .3%.  Since 5/19/11, a number of stocks with the yellow TrackNTrade Signals were exited.  As of 5/30/11, the currnet statistic is 20 winners and 27 losers with 21 closed position and a small lost of .16%.   %Winer is 42.55, which is actually pretty good.  The remain position left in the portifilo probably are good candidate for running up if the market turn around but I feel the TrackNTrade signal is still a bit too slow and the number of stock holdings  may not be easy to keep track of.

I now believe I have a winning strategy and anyone interested is invited to visit or join the Alpha 20 Hold Group that I set up.  If you are like me, you are tied of all that lag - lag forcasts - lag in signal an IN and lag in signal an OUT.  Alpha 20 Hold Strategy is strictly mechanically and get you out the moment a stock stops trending.

RMTI is made it to become a member of Alpha 30 this week and immediately pass the filter this weekend.   If you know of a better trap that Alpha 30, let me know and I can stop a portifolio to test it.

Statistic is reported by setting up a Vector Vest Portfolio.  Entry is on the Open the day following the Pop.  Exit is when TrackNTrade issued a yellow warning color.  Each position will be of equal amount. Gain is measure against total of all outstanding positions.

Watch on Pops is maintained until TrackNTrade issue a yellow warning color on the stock. The positon will then be closed and no longer watch.

Only SGI and HOLX can be considered as failed. The rest are either hanging in there or off to flying.

8%+ gainers are OXGN, GENE,KLIC,BIOS,NUS,RAH and IMMR.

Barchart TOP 100 was down below mid March low this morning, but manage to regain footing a bit.  Looks like this old bull is running out of gas if Barchart TOP 100 Index is a leading indicator.

No bad for the Pops under this environment.  But the risk is high as the percentage of failure is much higher at the end game.

Nothing to add to watch today.