Last week SPX appeared to complete an abc sideways correction.  By Friday the index was heading back towards its lows and ended the day and the week just above critical support at the confluence of the 200 EMA and the uptrend from March 2009.  The setup is for a potential gap below this support zone on Monday, which could then trigger sell stops leading to a cascading decline.

Commodities continued to lead to the downside, with Crude breaking lower and the Agriculture and Grains sectors breaking key long term support levels.  Gold and Silver also broke down from key support.

Overall the setup continues to be for a major break of support and a dramatic acceleration of the downtrend.  Whether this entails a strong C wave decline to support, similar to the March 2011 decline, or an outright crash, remains to be seen.  Either are distinct possibilities.

Late in the week, governmental and monetary authorities made transparently desperate attempts to prevent the breakdown of asset market prices.  First, the announcement of a Greece austerity plan was timed to the minute to prevent a break of the 200 EMA and fostered a short covering rally.  Next, Obama attempted to stimulate the markets by releasing strategic petroleum reserves to drive down the price of crude oil which would presumably give the economy an across the board "tax cut".  Neither of these efforts were successful as corporate and sovereign debt related news triggered additional selling.  In fact the net effect of last week's volatile correction and the efforts at keeping the markets above support was probably to exacerbate the situation by expending scarce buying pressure from "buy the dip" traders and investors and short covering in a minor corrective range.

The fundamental news cycle has now shifted into earnings warnings prior to the official onset of earnings season on July 11.  Negative corporate news out of Micron (MU) and others hit technology hard and grumblings are heard that companies will be pre-announcing earnings disappointments going forward.

Although European authorities and the IMF would have investors believe that the Greece crisis has been contained, evidence is mounting that Italy is next on the hit list.  The downgrade of the Italian banking sector is likely the first salvo in an ongoing attack on Italy's financial stability.  No doubt other countries are set to show cracks in the facade of their solvency soon as well.

In the following video I detail the current basic technical picture for global markets.  Before viewing it you might like to also review my prior videos and blog postings in this series:

Here's a direct link to the current video:

As I have been saying for weeks now, the basic technical situation is quite precarious and even a cursory look at the charts of the major markets is enough to alert the open minded investor that there is major risk at hand.  Yet even so, most analysts are focused on a perceived short to intermediate term "oversold" condition or an apparent "excessively bearish" sentiment picture.

The major breakout on the US Dollar Index chart is perhaps the most important indication of that a rapid, dramatic shift from risk to safety is under way. 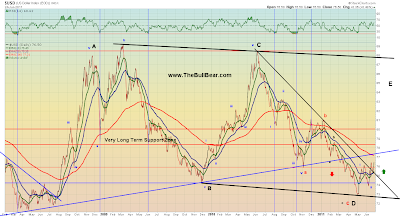 VIX would be the next big indicator to make a dramatic breakout.  It appears to be ready to move. 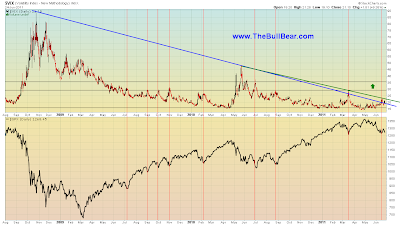 Naturally, the market can prove us wrong at any time, and we should not get complacent or take our eyes off the ball.  Any move above 1293 on the futures would be enough to get me to close my short positions and reassess the situation.