In the introduction to the last Bull Bear Market Report, I further developed the thesis that an impulsive equities bull market began in November 2012:

Most analysts continue to make the mistake of believing that a secular bull market started in March of 2009. The actual situation of this market very closely parallels the 1974-1982 time frame. While the price bottom was made in 1974, the actual secular bull did not begin until the 1982 low. Our contemporary 2009 bottom and November 2012 low are playing the same role and function. While a great many market participants believe that this bull is "long in the tooth" and fret that the market is at or near the prior all time highs, a correct understanding of the actual context of the current market setup shows that instead we are yet in the early stages of a secular bull. It's also important to note that while skepticism regarding the market rally is not as negative as it was in 2010 and 2011, it is roughly comparable to the period of the 1982 breakout. Now as then, optimism is growing with a lingering backdrop of deep skepticism and fear. The general investing public is still largely ensconced on the safety of bonds or in cash.

Even as the US markets continue to hit fresh all time highs on a nearly daily basis, many commentators and analysts feel that the market is "high" and are fearful of buying. The misconception that the bull market started in 2009 has set up a fierce bull run that is currently targeting the 1695-1700 area on the SPX futures by early June and approximately 1760 by early August.

Today we saw an upside channel break. We have seen this develop into a fractal pattern. The first upside channel break came in January as SPX busted through the parallel channel bounded by the 2010 and 2011 lows and the 2011 and 2012 highs (that contained the (E) wave sideways triangle bear wave). The second upside channel break came in March as the upper rail of the rising wedge formation bounded by the March and September 2012 highs and the June and November 2012 lows was busted. The third upside channel buster came today as the market accelerated through the upper boundary of the bullish impulsive parallel channel formed since the November 2012 bottom. This is extremely bullish tape action particularly in light of the rest of the technicals underlying this market as well as an extremely unique intermarket setup. Barring a rapid reversal back into and through the bull channel, the coming weeks should see undignified chasing as investors attempt to pile into a stock market which has refused to give them an entry point. It should also see a decline in US Treasuries that shocks most market participants.

While early 2013 saw much anticipatory chatter about "The Great Rotation" out of Treasuries and bonds in general and into equities, a recent review of the financial media shows that that chatter has been replaced by disinterest and skepticism. Even as the rotation has started to accelerate and even as charts and technical indicators are showing clear setups for a downdraft in bonds, few recognize that it is actually happening.

On April 29 I told BullBear Traders that it was time to short Treasuries:

I bought a small position in TMV, the 3X Treasuries Bear ETF. TLT:SPY ratio appears set for a large breakdown: 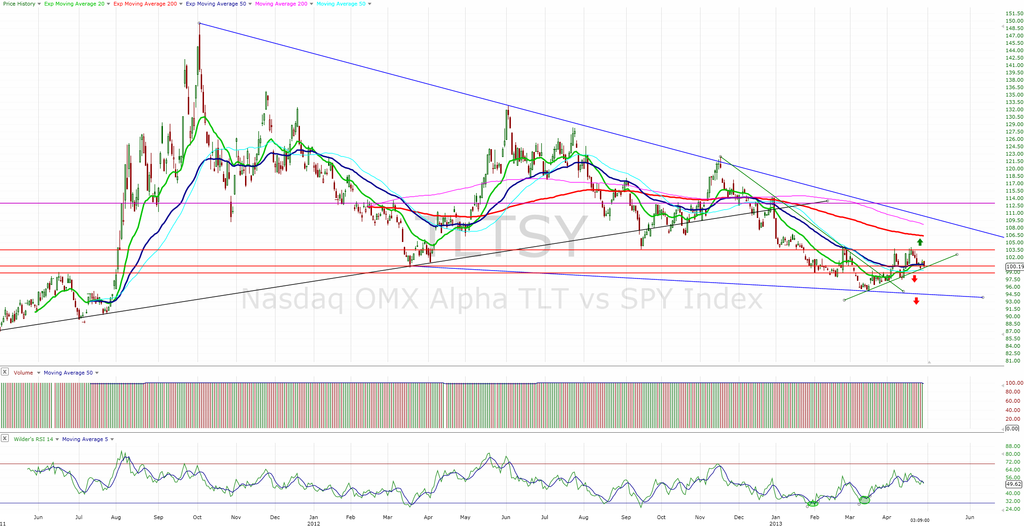 At the same time the stock market appears set for a 3 of 3 bull run to new all time highs. 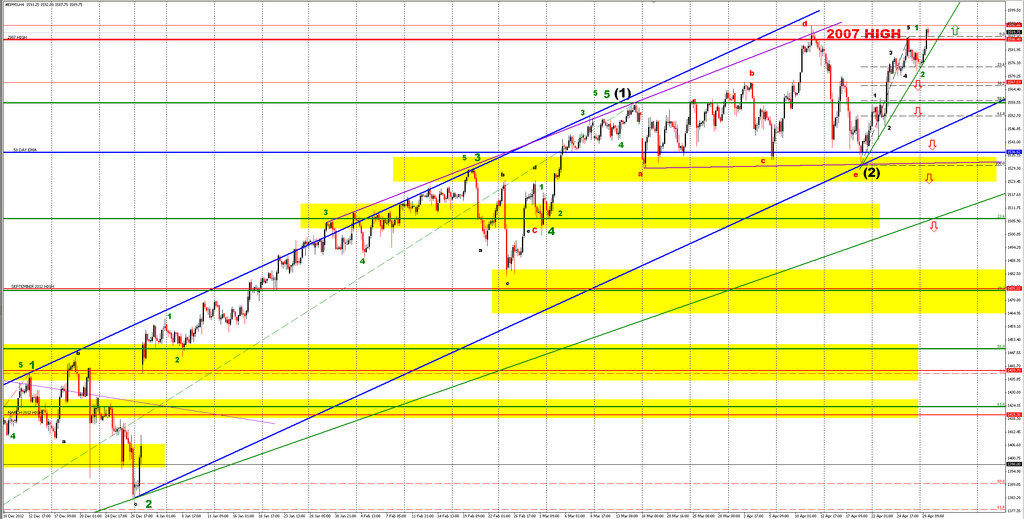 My take is that the "Great Rotation" trade is probably about to start for real very soon.

Two weeks later Treasuries appear poised to break down from a Head and Shoulders top and have declined continuously without a pause. Tape action has been very bearish. Yet Bond funds are still attracting record flows and PIMCO's bond holdings are now at multi year highs: At the same time, incongruously with his market exposure, Bill Gross has (yet again) called the top in the bond market. My take is that the third time will be the charm for Bill, though he apparently lacks the courage of his own convictions (twice bitten, thrice shy apparently): "Mr. Gross stressed in his comments Friday that a bear market in bonds, typically defined as a price decline of 20%, isn't imminent." I don't think it's difficult to see that a decline to 120-127 in the 30 Year has already begun and though I don't yet have a sense of how long it will take it will not surprise me to see that zone hit before the end of 2013.

In the April 24th BullBear Market Report, I also indicated a long term bullish setup for the US Dollar:

The very long term chart of US Dollar argues strongly for a period of long term strength: Compare the 1987-1996 period and the 2008-2013 period. I think we are about to see a lengthy period of US Dollar outperformance as investment capital flows into Dollar denominated assets. The precious metals bear market crash is likely an early response to this effect.

Note that this comes at a time when market psychology presumes the "Death of the Dollar" as imminent and inevitable and that it comes in the wake of QE Unlimited. Dollar bears and precious metals bulls have been handed the ultimate, favorable conditions and yet the anticipated result has not occurred. "When a market does not do what it should do when it should do it then it is about to do THE EXACT OPPOSITE in a very big way".

It's not fashionable to talk about a resurgent US economy and renewed US global competitiveness. "Everyone knows" that can't happen. Yet when "everyone knows" something, often the opposite turns out to be the case. My take is that the technicals of the Dollar, Bonds and US stock market are indicating that "everyone" is about to learn something about dangers entrenched assumptions and attempting to overlay political worldview over market trading.

Indeed, we are seeing the Dollar Index in the early stages of breaking out from a inverse Head and Shoulders bottoming pattern formed over the period from 2004-present.

This piece of market commentary starts to recognize that intermarket relationships are undergoing a secular shift:

Are Out-of-Sync Markets Sending a Message?

Here's my snapshot view of the current intermarket setup:

This setup iis probably sending the signal that significant US centric economic growth is on the horizon.

The now two year long bear market in commodities and the recent plunge in metals prices is likely an early response to a coming period of persistent dollar strength. In the recent BBMR I indicated that I expect crude oil to join the bearish trend in commodities soon:

Remember "peak oil"? It was broadly "known" that crude oil production had begun a secular decline that could not be arrested. The only possible result: disaster. Mass starvation, war and a reversion to pre-Industrial Revolution living standards. But something happened on the road to the Apocalypse. The world's largest economy appears on track to become a net oil exporter within 10 years. And the chart seems to be forecasting a C wave decline to something like $45.00. 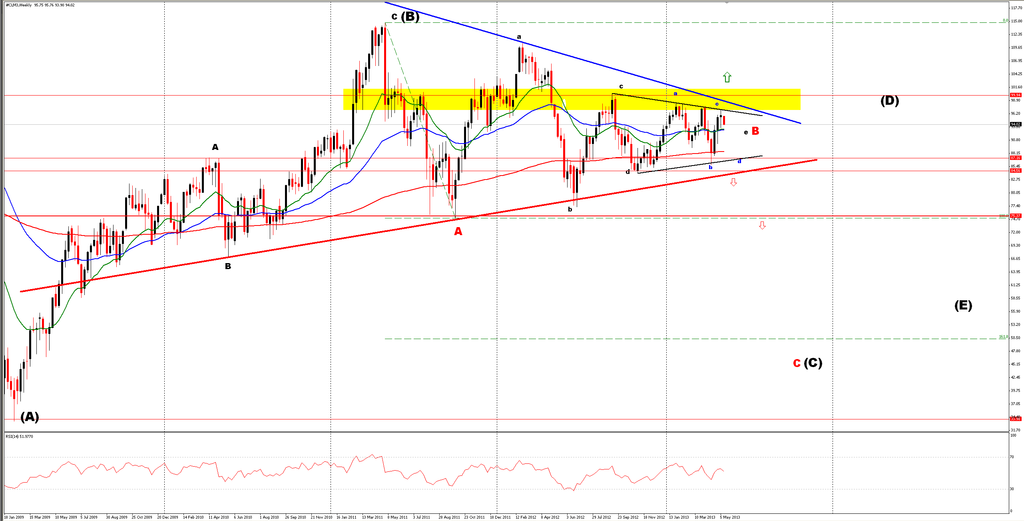 Note that a drop in WTIC prices to $45 would be an incredible cost savings boon to domestic operations of US companies and the economy in general. The savings generated by the halving of energy costs would be a major catalyst for real GDP growth. And that's what this chart appears to be forecasting.

I think it's probably got a few more weeks of churning before it really starts to break down, but I established a small position in the crude oil bearish ETF DNO today.

The overall intermarket environment appears to be in the process of a major, secular shift that correlates well with the technical shift from primary bear to primary bull that took place in the stock market during 2012.

I am long SSO, long TMV and long DNO.

The rest of this report details the technical characteristics of the secular shifts in SPX, Treasuries (and the rest of the bond market), the US Dollar and Crude Oil.

PLEASE CONSIDER MAKING A DONATION TO SUPPORT MY WORK USING THE PAYPAL LINK BELOW.