Pattern recognition is the primary task of Technical Analysis.   Determining and distinguishing between patterning and order on the one hand and noise and chaos on the other is the essence of good TA.

Analysis shows that markets have created prolific (though throughly unrecognized) Head and Shoulders topping patterns during the February to May 2012 time frame as well as during the period 2009/2010 to 2012 (also throughly invisible to most market participants).

In addition, there is a extremely high degree of correlation, a sort of fractal echo, between the 2011 top and crash and the current market setup.

The daily chart of NYSE illustrates both of these patternings very well: 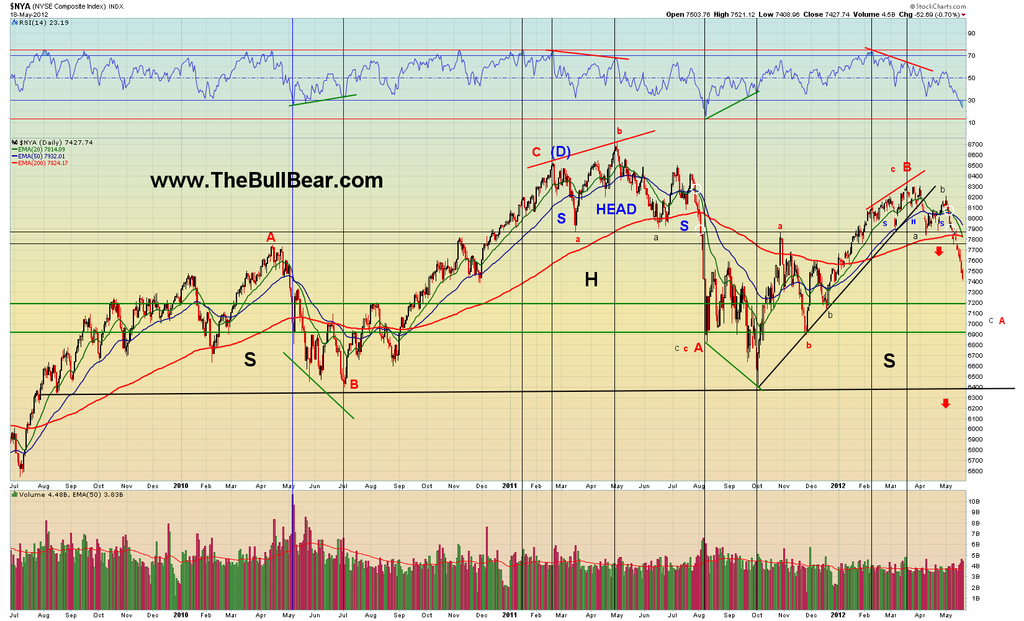 This chart illustrates the nearly identical point-to-point fractal echo of the 2012 market with the 2011 top and crash.  Just follow the numbers: There is also a fantastic degree of coherence between the 1987 period from the top through the day before Black Monday and the exact same period of time leading up to Monday, May 21, 2012: 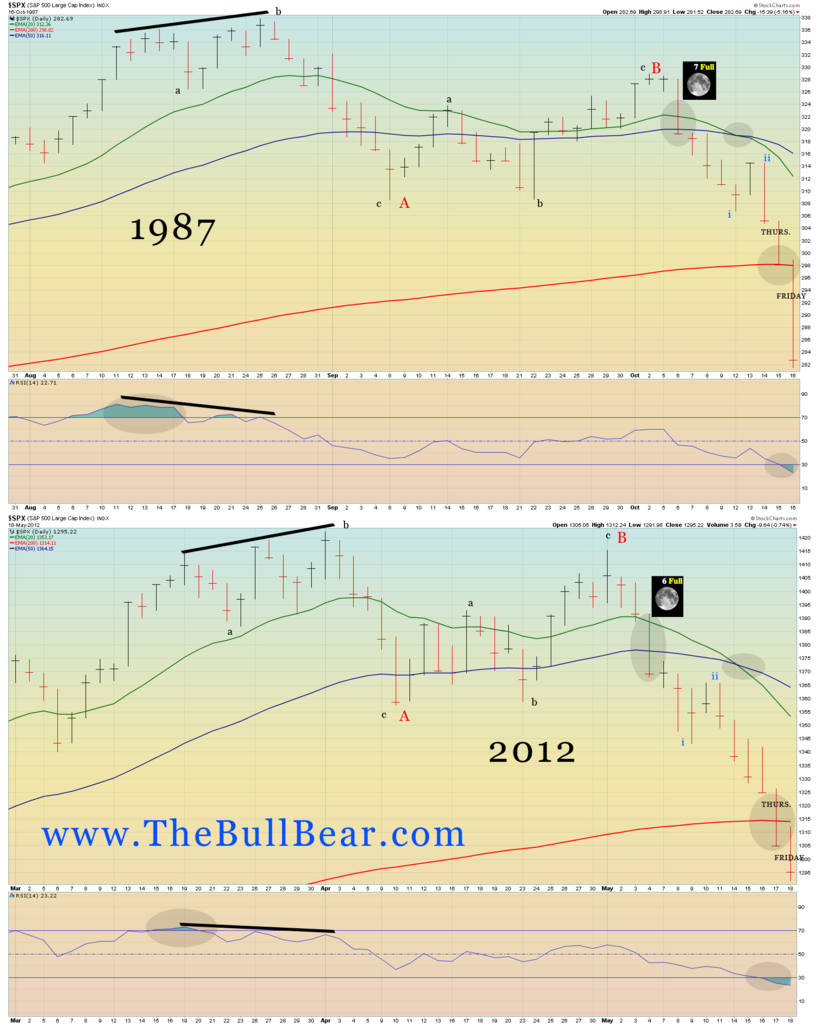 Although we haven't had a "Black Monday", you might be able to substitute another day of the week soon.  The day after Memorial Day might be a good candidate.

Although I make great use of Elliott Wave Analysis as part of a comprehensive Technical Analysis methodology, I don't use time cyclicality much.  However, I do use Fibonacci relationships.  Fibonacci retracement and extension clusters, taken together with other chart levels, can be extremely helpful analytical tools.  Fibonacci applied to time shows some significant correlations: 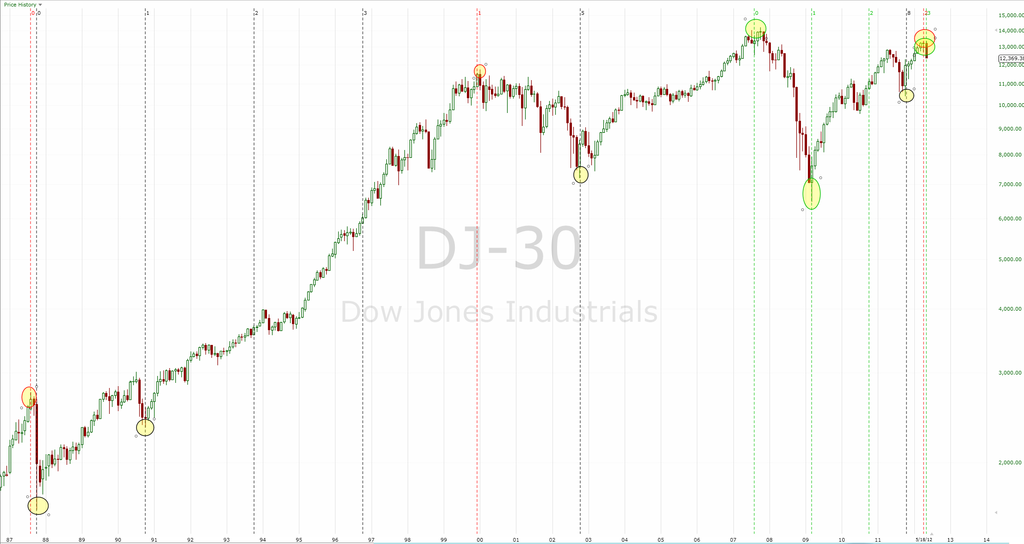 Looking at the weekly chart, we also find a high degree of time cyclicality: 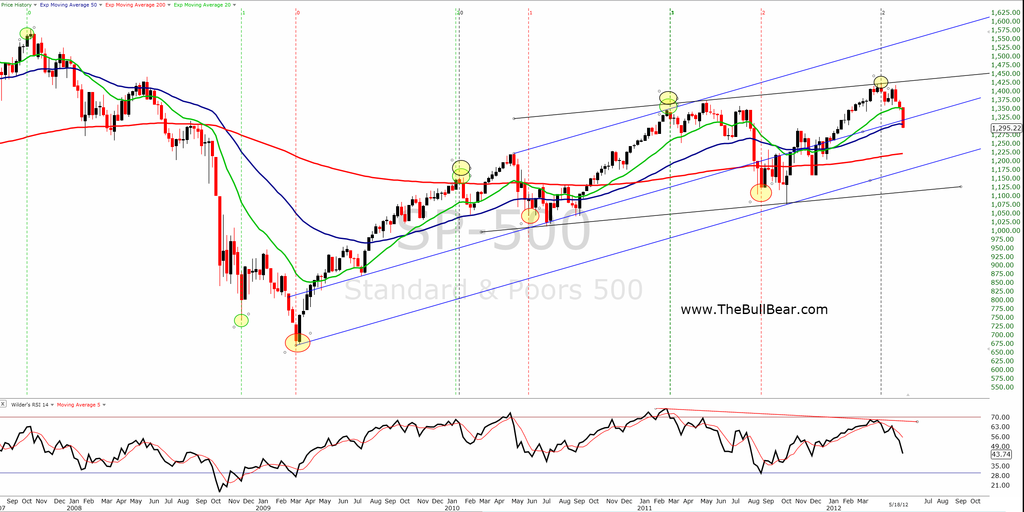 A daily chart of INDU appears to show some shorter term Fibonacci time relationships as well:

This very high degree of apparent cyclicality would seem to fit very closely with the apparent cohesive patterning we are seeing in the 2011-2012 time frame.  If indeed there is a rhythmic patterning relationship between the 1987, 2011 and 2012 tops, the probabilities of an "out of left field" crash leading to a hard bottom and subsequent resumption of the very long term bull trend appear to be high.

Taken together with the very large body of technical evidence that we are currently in a high risk, high potential crash window presented in my recent blog postings and editions of the BullBear Market Report, I think there is more than sufficient cause for investors to at the very least hedge their exposure to risk.

I turned bearish at the February 2012 technical top and began shorting aggressively at the April and May highs: 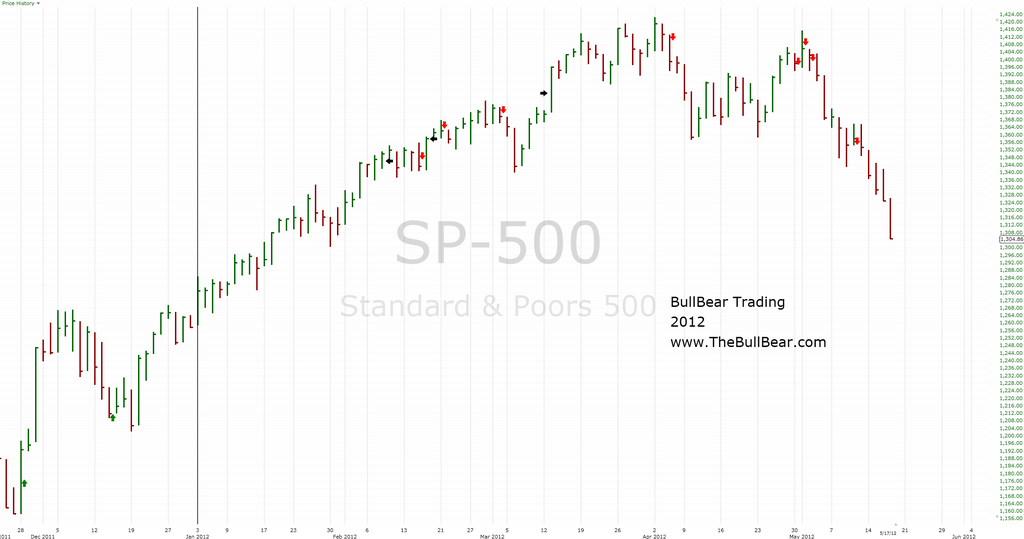 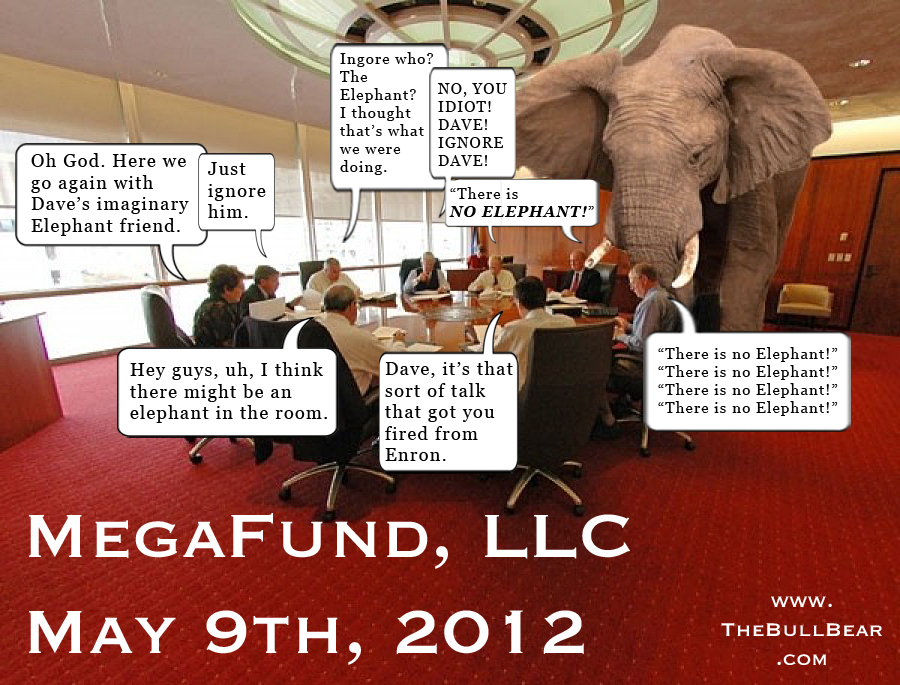 Need some help staying on the right side of the markets?  Join the  BullBear Traders room at  TheBullBear.com.  You'll get this kind of timely, incisive, unbiased  stock and financial market trading, timing, forecasting and  investment technical analysis and commentary daily.  It's free to join, no credit card is required and if you like my work you just make a donation at the end of each month.