Dollar and Precious Metals: Apocalypse Not Yet?

The recent move in gold and silver may be an important top and the corresponding decline in the US Dollar may be a bottom in the making. On the other hand...


TIME IS UP! A DECISIVE MOVE IS COMING SOON

As I write this I am hearing Bloomberg announce that "10 of 12 gold analysts are predicting that gold will appreciate 20% this year against a weaker dollar". A prior report expressed firm confidence that the trend in the Dollar will continue to be down. And the report preceding that added to the growing chatter calling for the dollar to assume the role of the Japanese Yen as the world's "Carry Trade" currency.

As a contrarian, I look for such moments of consensus to consider the other side of the trade. This approach helped me spot the bottom of the equities market in March. When the consensus was that a global financial collapse and Greatest Depression were inevitable, from a contrarian perspective this marked a screaming buy.

At this time the bullish consensus on precious metals and the bearish consensus on the dollar appears to have reached an inflection point comparable to March 2009 for the stock markets. Either it really is Apocalypse Now for the greenback and the long awaited moonshot for gold and silver...or it's not. And with these markets set up and fully loaded for a dollar Armageddon a failure to fulfill that expectation may very well produce a dramatically contrarian result.

Gold and silver are stalled at major resistance and RSI is at a level which has produced significant selloffs in the past. GLD did manage a weekly close above the key 98 level. A gap down open below that level may trigger trading stops. How such a scenario plays out may tell us a lot about the nature of this move. Support at the top of the green triangle is key. If price fails below the apex of the triangle on a weekly close then much lower prices are coming. A recovery to new highs will likely spark a strong bull run. 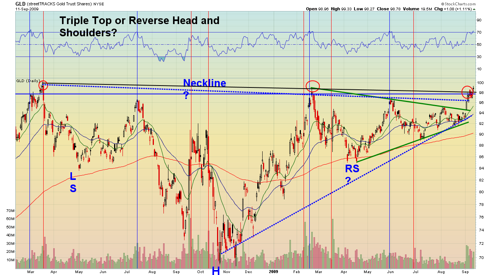 Silver's setup is similar to gold's having also closed over a key technical level. It is similarly overbought on the daily chart. 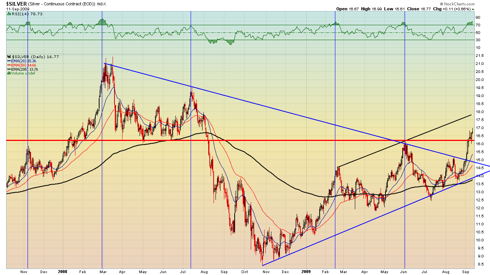 Gold and silver are commodities. The commodities market is showing clear signs of being in a bear market. How likely is it that the precious metals will diverge from the entire commodities complex and surge higher? Wouldn't commodities in general be rising if the US dollar were on the verge of collapse or even a major market move? The chart of the CRB can only be viewed bullishly with substantial mental gymnastics. 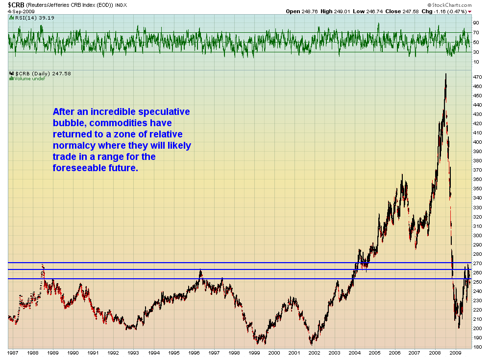 Objectively these are charts of a market that is now in a bear trend after a speculative bubble. The near term and long term for CRB is sideways to down. 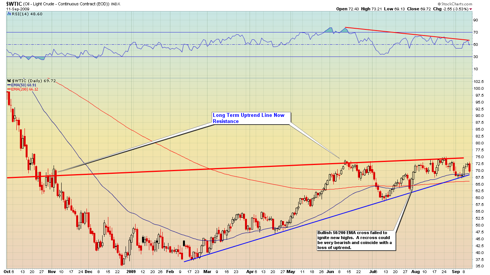 Could crude oil break out from here? Sure. But it is trading up against its long term uptrend line which has rejected price three times already. RSI is in a downtrend. Equities have made much higher highs but crude oil has not. Crude is teetering on the brink of breaking its uptrend and losing both its 50 and 200 EMA.

Copper is also trading against heavy resistance and may be ready to retreat.

Even after the massive money printing by central banks and Keynsian spending by governments worldwide that we have seen in the last year commodity prices are not keeping pace with equities. While stocks continue to surge higher, commodities are lagging, particularly since June. The CRB: SPX ratio is showing a definite bear trend. 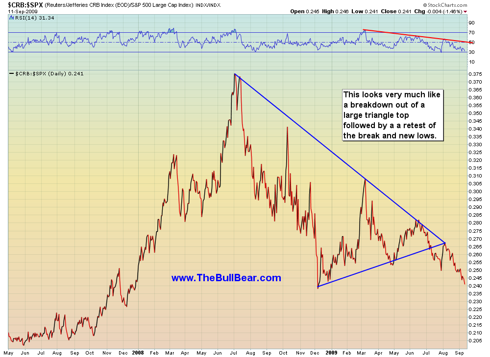 I might be more enthusiastic about the prospects for a sustained precious metals bull run if the commodities complex were confirming the moves in gold and silver. But they are not only not confirming, they are casting contrary indications. Also troubling is the absolute silence about the charts I am presenting here. The absolute faith in a commodities bull market seems to be entirely unquestioned. It is possible that commodities will suddenly rally sharply and play catch up as the dollar breaks down.

The Dollar, which generally trades against gold may actually be showing signs of bottoming. The minor break of its descending wedge is the kind of technical failure which almost always invites a strong move in the opposite direction if the break does not elicit follow on selling soon after. The failure of key multi-decade support at 78 has yet to produce strong follow through. It is very true that a solid breakdown out of this descending wedge would likely be a signal that a significant downside acceleration is in progress. It is also true that a reversal and breakout from the wedge would be very bullish for the dollar and potentially bearish for the precious metals.

Potentially the dollar might find the first leg of its rally as equities undergo a selloff and money goes to cash. The next phase of any dollar rally might result as the economic growth story takes hold.

This drama may play itself out as "Apocalypse: Not Yet" for the US Dollar and an aborted space launch for the metals. Or not! But something tells me we will not have to wait very long. Stay tuned!

Comment by Michael on September 14, 2009 at 7:25am
if you are a company in the us you have some very strong fundamentals, cheap commercial property to rent, cheap and ample labour, cheap money, plenty of risk capital to raise equity, cheap currency and a population ready to save big time and an ability to totally reinvent yourself a la madonna.

l would rather buy a .25 cent share that could go to 1.00 based on the above fundamentals. there are still plenty of cheap small stocks in both the usa and australia