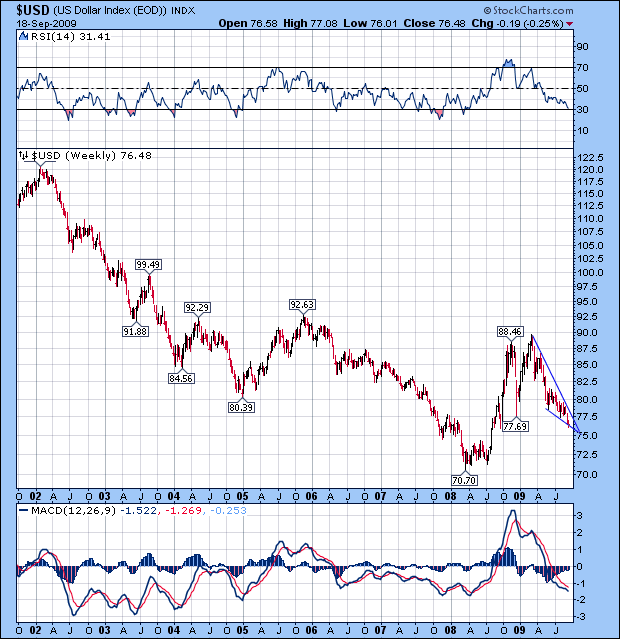 Whatever happened to the Yen carry trade?

Japanese overnight interest rates are still lower that the U.S. (10 basis points versus 25 basis points). However, the three month Libor rates show that it has been cheaper to borrow dollars rather than yen. In addition, the yen has been appreciating against the dollar since 2002. So those having to buy back yen (to unwind a carry trade) have had the extra burden of currency appreciation working against them.

Thus, the yen continues to appreciate against the dollar. However, this relationship is also approaching a critical resistance between 1.45 and 1.50. Can it power up over resistance? The bearish wedge formation suggests that it is not likely.
What has happened in the past six months has been that the yen and other high-beta currencies such as the euro, the pound and the Australian dollar have all rallied with the equity indexes worldwide.

This is a departure from the pre-2002 relationship, where the yen was sold (short) whenever risk appetite increased. The traders back then took the proceeds and bought higher yielding currencies, such as the dollar.

Now the dollar is being sold in the new carry trade and the proceeds are being applied to the equity markets. Is this practice becoming long in the tooth? Let’s look at another relationship.

The Euro has also been appreciating against the dollar from the same low in 2002. What is different is that the bearish wedge has broken down in the euro-dollar ratio. The rally since March has been counter-trend. It has just exceeded the 61.8% Fibonacci retracement level, so the relationship may be ripe for a reversal.

The US dollar, on the other hand, is in the final stages of a descending (bullish) wedge. It, too, has completed its retracement of a wave 1 or A, and seems to be winding up for the pitch in wave 3 or C. If this analysis is correct, the carry trade that is now funded with borrowed dollars will have to be unwound, or the market will do it in the form of a margin call.

Bearish sentiment against the dollar is at an all-time high. Those with a strong set of beliefs against the dollar will find it very hard to part (even temporarily) from them. Strong rallies are made on the backs of panicked short sellers, as those caught short in equities in March will attest. An open mind and stop loss may be a good idea, if short the dollar.

In summary, those planning on a weak dollar funding a carry trade for the foreseeable future may be taking on a double risk; the first may be having the funding mechanism (dollar) become too expensive and the second may be the assets held may have more risk than what was bargained for.

The yen carry trade may come back after all. But history doesn't have a way of repeating itself exactly. The political changes in japan may be a signal that the easy money regime may go the way of the dodo bird. Stay alert!

Comment by Steven Vincent on September 21, 2009 at 11:41pm
Clearly the performance of the EuroYen shows that something has changed in the carry currency market. It's been flat as equity markets have continued to surge. I agree that the combination of excessive bearish sentiment and a tenuous dollar carry trade that will have to be unwound suddenly makes for a potentially explosive upside in the dollar. When this will come I cannot say. I do think that we will need to see a bit of a panic and extreme bearishness equivalent to what we saw in the equities markets in March 2009. I think this can come as the dollar retests its prior low, fails and then snaps back above the failure just as the SPX did in March.