Apocalypse Now? The Secular Shift at the Crest of the Long Wave

(The following is the Introduction to the latest BullBear Market Report, "Apocalypse Now? The Secular Shift at the Crest of the Long Wave")

The last BullBear Market Report, issued on August 26, 2019, was entitled "Secular Long Wave Building Towards 2020 Final Top".  It called for the completion of the final subwaves of a Major Wave (4) corrective triangle in the US equities markets with a following final 5th wave of the larger degree 5th from the 2011 bull wave initiation.  On October 1, 2019 the final e-wave of the Wave (4) completed and the major indices did indeed launch higher into a 5th wave move.  Recent price action begs the question: has the final top of the secular long wave from the 1949 very long term bull wave initiation been made?  It is entirely possible, perhaps even probable.  In this report we will dig into the technical evidence for a secular top of historic scale and duration that would accompany fundamental economic, political and social shifts as dramatic and far-reaching as those associated with the 1929 top in the Dow Jones Industrial Average.

We'll go in depth on the very long term charts in the main body of this report, but here in this introduction, let's just get oriented about the essential context of the current market.

Below we have a quarterly (3 month) line on close chart which shows a long term trend channel bounded by the 1929, 2000 and 2020 tops on the upper rail and the 1932 and 1982 bottoms on the lower rail.  The period of 1929-1949 was an a-b-c-d-e triangle that corrected the prior secular bull wave.  There was a clear uptrend channel from 1949 to the Wave (1) top in 1965 followed by another a-b-c-d-e triangle correction that ended in 1982.  From there Wave (III) produced another clear trend channel until the 2000 top and yet another a-b-c-d-e corrective triangle played out until 2011.  Again, the ensuing Wave (V) bull market produced a clear trend channel until completing its 5th subwave recently. 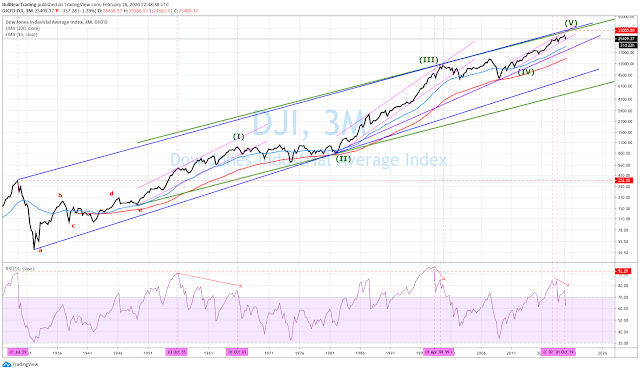 Did last week's crash announce the end of the secular bull market that started in 1949?  This is the question that is on the table right now for traders and investors.

There may be a tendency to think that the recent crash, the fastest and most violent drop from an all time high in history, was just an overextended market with too much speculative excess overreacting to fears about a public health crisis.  Indeed, from a technician's point of view, we'd rather not have an exogenous factor such as a viral pandemic muddying the waters and casting doubt on the technical picture.  But we must keep in mind that such factors are merely catalysts that activate the underlying market conditions.  If the conditions for a crash do not exist, no event can trigger one.  So when you see such market action, it's incumbent upon us to take a hard look at the real conditions to see if this is a one-off correction (such as 1987, for example) or the start of something much more significant.

Right now the chatter among market analysts is tending towards the view that we are in a corrective period and that eventually the bull market will resume.  In the short term, certainly a lot of technical damage has been done and one could make a case for a shorter term downside extended condition that could easily produce a counter-rally.  Some think that such a move began in the final hour of trading on Friday: 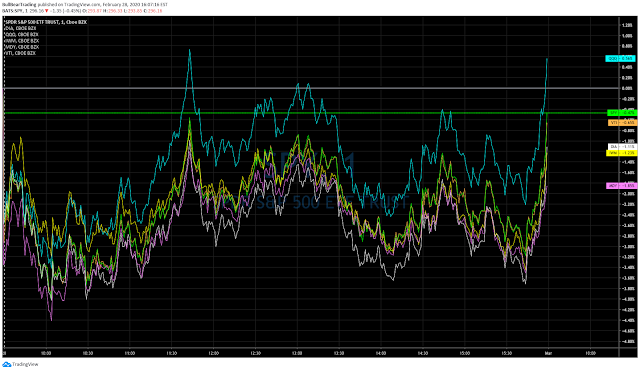 But a look at the 30 minute chart shows that during the decline, we did not really see a big expansion of downside volume relative to volume seen during the rally.  Indeed, a big part of the price decline came in the futures gaps each trading day of the week.  So it is questionable whether we have actually seen capitulation selling sufficient to put in a short term bottom.  We did, however, see a very large volume spike in the final 30 minutes of buying on Friday: 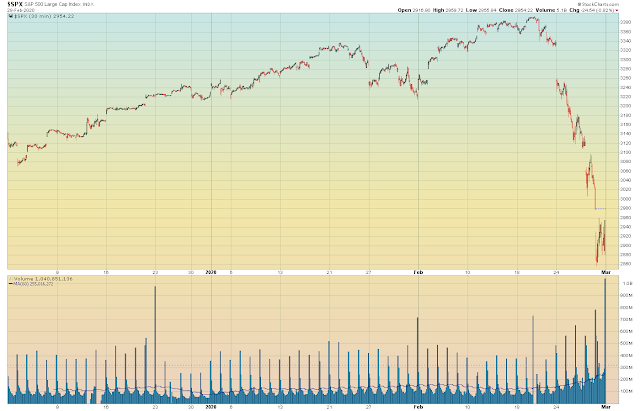 So rather than capitulation selling, we may instead have seen investors lunging at the decline trying to get long.  This would mean that in spite of a legitimate crash, there's still not enough fear in the market to put in a bottom.

The Dow Jones hourly chart shows the October 2019 low, from which point the proposed final 5th wave began, has been taken out decisively.  If the wave has been more than 100% retraced, then it is over. 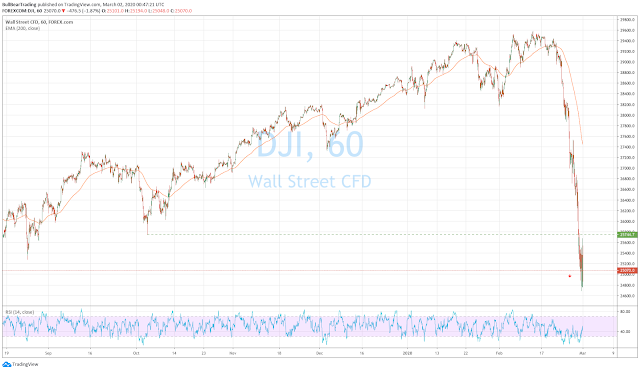 As we dig into the charts and further analyze the wave structure along with the associated technical indicators, we will see that it is likely that we have seen a significant wave ending event.  Any short term rally, say perhaps to the 200 hour moving average (red) on the chart above, will likely be a selling opportunity for all longs, regardless of time frame.  Given the suddenness of the break, many longs, including the highly speculative retail traders that were piling on during this proposed final 5th, have been trapped in their positions.  So there is very likely a lot of overhead supply looking for a rally to dump into.

It's worth noting, as well, that the most violent crashes come from heavily downside extended technical conditions, and that the last week only produced one decline of more than 5%.  So with respect to current market conditions the worst may be yet to come.

The overall context of the current market scenario involves a paradigmatic shift of multi-generational proportions.  If this is the case, financial, economic, political and societal crisis will become the order of the times.  Arguably, we are already in a quasi-civil war in the US and many other nations (U.K., France).  I think an argument can be made that the US and China are already in an undeclared, asymmetrical war as well.  Whether the context is domestic or international, struggles are being waged to determine the fundamental direction of nations and the globe.  Gigantic forces are colliding. Tectonic shifts are happening.  The determination of the specific nature of the changes resulting from these shifts is the purpose of these wars.  We can only hope that they continue to be waged without the use of arms and little violence.

I want to emphasize that while the process of change in this proposed "4th Turning" may entail a great deal of pain and woe, it is necessary and inevitable and part of the natural cyclic movements that all human-created structures transit.  I don't consider this to be "gloom and doom".  It is what it is.  It's simply a matter of recognizing the truth of the situation to the best of our ability and dealing with it accordingly.  As traders and investors and human beings, neither undue optimism nor unwarranted pessimism serve our success and well being.  I'll continue to provide my readers and subscribers with sober, fact-based technical analysis and commentary so that we can all get through whatever difficulties and challenges may come.

Great article, I need to more aware about the 4th turning...,believe it is impossible to really comprehend the charts without being aware of the massive tectonic shifts at work as you say ..Thank you