A New Beginning of the End for Stocks?

The last BullBear Market Report explored whether the long term Bear Market that began in 2000 may have ended in November of 2012.  This report comes down on the side of concluding that indeed a new, secular Bull Market has begun.  While there is still some chance that a bear market (D) wave top could come in the vicinity of the 2007 highs, evidence is mounting that the 2011-2012 period was an (E) wave of a long term triangle and that recent price breakouts and changes to the technical character of the market mark the start of a very long term Major (V) bull market.  The Dow Jones Industrial Average appears to be projecting to a completion of the ongoing bull market from the 1932 low in the area of 18,800 in the late 2015-early 2016 time frame.

It has been my position since I started publishing the BullBear Market Report that the market was in a Wave (IV) correction and that the ultimate bear market would still be some years away and from a higher level.  My bearishness in 2012 was in the context of the final wave of the bear market with the anticipation that a new Bull would be on tap.  This appears to have come about a bit quicker than expected and via an unusual sequence, no doubt due to the unprecedented market intervention by monetary authorities.  While I disagree with those who say that QE has made technical analysis unworkable, I do agree that it added a significant degree of difficulty to an already tricky market environment.  Tracking and trading a triangle ending a triangle is never easy, even without massive market skewing intervention.

I don't consider myself to be an "Elliotician" but I do think that, when properly used, Elliott Wave analysis can be extremely useful.  One of the best uses for Elliott Wave is to establish a set of possible scenarios that help lay out a roadmap for navigating the market.  If the trader can determine where he is on the course of the roadmap, he can determine with a higher degree of confidence how to trade the market.  Some wave sets are fairly straightforward and unambiguous 5 and 3 wave patterns.  Some corrective waves, such as the period just completed in 2012, are more complex and difficult to follow in real time.  When technical characteristics of a market change in sync with the completion of an Elliott Wave pattern a clear signal is given to the trader to change his orientation.

If a market has transitioned into a new phase, then indicators should be expected to behave differently.  We are already seeing that many technical conditions which had previously been solid markers of a top are no longer.  One of the mistakes that analysts are likely to make in the coming months is that they will be relying on bear market methodologies to trade bull market conditions.  We are going to need to look for new setups to trade this bull effectively.  Fortunately, if we are in an impulsive bullish environment, longer hold times will be possible and fewer trades will be necessary.

While technical comparisons to the prior major wave bull market from 1982-2000 may be more useful than anything that happened during the bear, we will also need to take into account that this Bull will not share the same characteristics as the Wave (III) market.  As a terminal Wave (V), it is likely to be shorter in time and duration, technically weaker and engender less public participation than the prior bull wave (though some aspects of the mania should return at the top).  There's some potential that it could play out as an ending diagonal, or a series of five overlapping waves.  On a percentage basis, a move from Dow 12,471 to 18,800 is only a 51% rally.  In contrast, Wave (III) was a 1425% rally from the 1982 low.

It's important to note that during the 1970's bear market there was a preponderance of analysts who were sure that the Keynesian monetarist experiment would blow up and that a new depression was assured.  The rhetoric was not much different than it has been since 2000 and particularly since 2008.  While my personal sympathies are with Austrian free market and sound money economics, it's important to note that such economic theories are not market timing methodologies.  They were proven wrong in the 1970's and apparently are going to appear to have been proven wrong again.  As hard as it may be to believe, the mad scientists at the economic and monetary controls will probably appear to be geniuses for another 3-5 years and at the top the critics will largely have been silenced.

I would guess that much of today's doomsaying will be quieted by the time Wave (V) completes.  Concerns about debt to GDP ratios and other such worries will likely have abated and long term bears will have capitulated.  Keynesian monetarist apologists will chortle wildly, assured that their "can kicking" policies were successful.  However, while some sectors of the economy will experience organic economic growth, other sectors will likely languish.  Structural unemployment will likely persist and even deepen for some segments, such as the 18-25 year olds.  There may be no real, dynamic growth engine (such as technology or housing had been previously).  And the government debt bomb will likely continue to grow.

Is it possible that Wave (V) will be a long, extended wave and not short and relatively brief?  I don't think there is any way to answer that at this time.  I do think that we are in the early stages of developing 2/3 of the planet and that revolutionary technologies can and will have transformative effects on productivity and economic growth.  Will growth and productivity be able to offset debt burdens, monetary debasement and the inefficiencies stemming from centralized economic planning and corporatist corruption?  We won't really be able to attempt an answer until we are much further into Wave (V).

Of course, if we are calling this a Wave (V) bull market, then a primary bear market would have to follow.  Presumably this would be accompanied by the disastrous conditions that doomer economists have been predicting since the 1970's.

So where are we on the roadmap?  The End?  The Beginning?  In my current view, we are at the Beginning of the End.  As in the 1970's, the post-2000 bear market was interpreted by many as the final top to the long wave.  But instead it seems that those anxious to reap the Armageddon whirlwind will probably have to wait a few more years.

Here's a view of the Dow Jones Industrial Average since 1932: 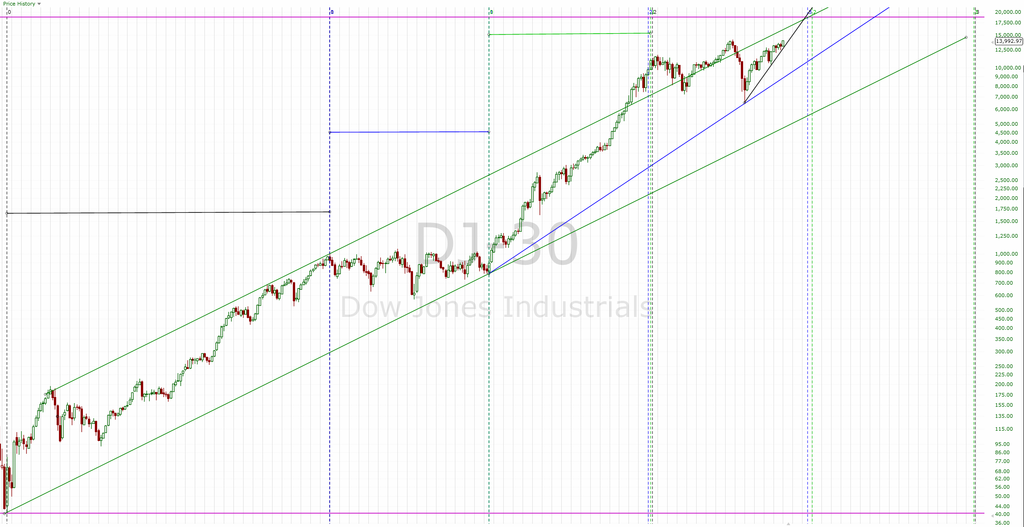 To read the full report:  http://www.thebullbear.com/group/bullbeartradingservice/forum/topic...

PLEASE CONSIDER MAKING A DONATION TO SUPPORT MY WORK USING THE PAYPAL LINK BELOW.

I see Wave (1) of the new bull market starting with the November 2012 low.

Thanks Steve Smith.  I look at a correction as a percentage of the prior move that is being corrected.  If we count this as a Wave (1) then we would be looking for a retracement of that wave which would be Wave (2).  How much would depend on the technical condition of the market when it tops.  Can't really say yet.  Wave (2) does tend to take back at least 50% of Wave (1).

There are now around 200 Stocks at their "All Time Highs"

steven great work and balance of seeing both sides through the noise of the past year. when attempting to pinpoint major inflection points and not get caught on minor movement, you have done well separating the two. i will ask the the elephant in the room, what type of correction do you see unfold over the coming weeks/months? i was watching cnbc friday and the vast majority of folks are still looking for the 5-10% pullback. maybe we dont get one for a bit although I think everyone would prefer a 50-80 point drop to work off the overbought conditions. always look forward to your thoughts. thanks