A Significant Correction in 2015?

Traditional signals and fundamental and technical analysis really don't matter any more. They really don't. You can't stop this train. All aboard. Dow 18,000 by December 17th. Dow 20,000 soon. You can't lose. You'll never have this chance again.

(comment to a mildly bearish article on a popular financial blog) Even the terrifying 1987 crash was nothing but a correction in a perfectly trending long term bull market.

In my view SPX and US equities in general are in the process of finishing a bull wave that started in November 2012.  It is possible that the bull wave can see a significant extension from current levels before it completes, but analysis tends to support limited upside and substantial downside risk going forward.  When equally viable Elliott Wave counts compete, the technician needs to examine the technicals, liquidity, sentiment and psychology of the market to see which count is better supported by underlying conditions.  In my view there is substantially more evidence to support a correction than there is to support a bullish extension at this time.  For this picture to change, we would need to see a fairly immediate and aggressive bull breakout move at the outset of 2015.  Failing that, if we see a continuation of last week's selling, it is likely that a sizable correction will be nearby.

A rally of about 2.7% would break long and intermediate trendline resistance as well as whole number resistance at 2100. 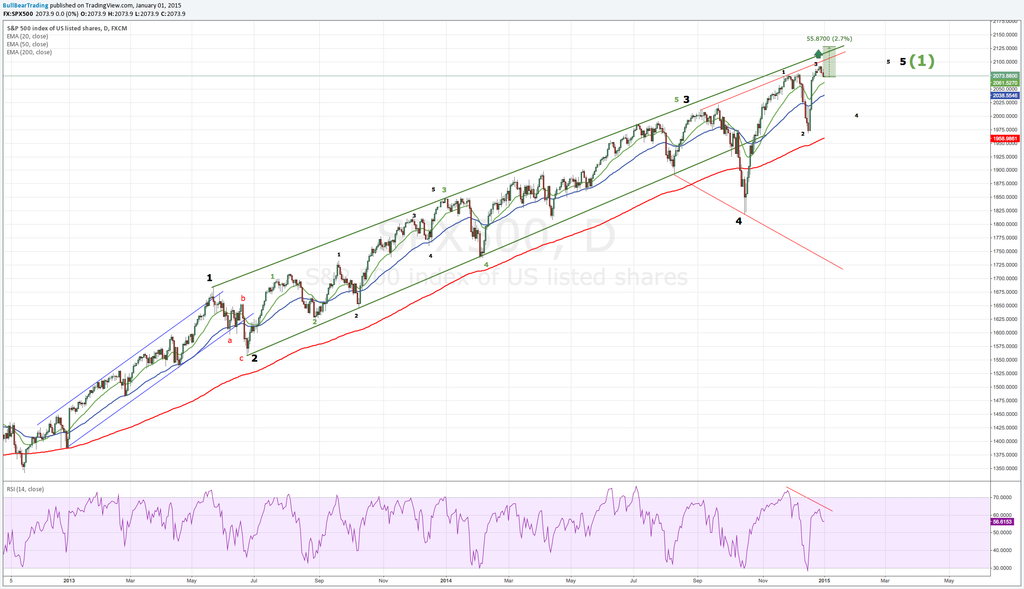 In the bearish view, Wave (1) terminates with a classic wave 5 ending diagonal formation.

Markets have recently seen the emergence of a series of themes that together may eventually harmonize into a bearish narrative, catalyzing a correction.

This would seem to be sufficient stuff to eventually coalesce into a compelling bearish narrative that can trigger and catalyze potentially bearish underlying technical conditions into a Wave 2 correction.  Taken together, there seems to be reason to expect that the deflationist meme will see a significant renaissance for a time.  When things really start to look scary, we will likely see the usual suspects--Robert Prechter, Harry Dent, Marc Faber--make the rounds on the financial media again.  Even inflationists like Peter Schiff will probably see some action if Gold sees a "safety trade" rally and global central banks collaborate on a round of extraordinary monetary measures to save the world.

In the end, if the Wave 2 correction does play out at this juncture, it will set up a great long entry opportunity for investors since, generally speaking, Wave 3 is the largest and longest lasting wave of a bull market.

In this report we will look at:

UPDATE: Markets have played out as anticipated and the core analysis of this report seems to be confirmed by market price, tape and technical action.  On January 9th SPX likely completed a Wave (1) bull market and is now in the early stages of a Wave (2) correction.  Investors with gains from lower levels may want to take some profit or hedge their positions against oncoming volatility.

Need some help staying on the right side of the markets? Join the BullBear Traders room atTheBullBear.com. You'll get this kind of timely, incisive, unbiased stock and financial market trading, timing, forecasting and investment technical analysis and commentary daily. It's free to join, no credit card is required and if you like my work you just make a donation at the end of each month.