Permalink Reply by J CHAN on September 2, 2011 at 11:33am
While the offical position of VictorVest at the moment is "VectorVest advocates caution when buying stocks at this time".  Its model portfilios has already exited to cash on the day before yesterday.  From yesterday's high , VictorVest BuySell Ratio has dropped from .32 to .15 and MTI from .9 to .74 showing a rapid and consistent decline that does not go well with the theme of possibly more upside to this market short term.  ??

"Now, I'm very bullish about the profit opportunities for stocks in the remainder of the year. Once we get past the Labor Day holiday this weekend, trading volumes will return and investors will realize that earnings growth has been phenomenal and stocks are cheap. But, there are some economic issues that have not yet been worked out that will weigh on the market."

Mr. Navellier does not time the stock market and focus on investing in high growth alpha stocks. He can hold onto a stock that lost 20% for a long time if he thinks there is a misprice.

It would be inappropriate for Steve to post other people's work to enrich the content of the Bullbear.com.  Sidekick John has no problem posting and oblige to add content for BBT.   Mr.  Bruce Pile does not write frequently, but each piece he wrote was insightful.

Gold bugs are bemoaning how gold stocks are not riding the gold rocket. They are vastly outperforming the miserable broad market, but so is cash, and the HUI is barely outperforming cash. Why aren't the gold miners going berserk like the bullion? Well, maybe that's just the problem -- they're going berserk. That is just what mining stock investors have been thinking the gold price is doing, and they must figure a stable, average price for gold will anticipate future financial performance. They tend to ignore moves in gold that are too fast to be trusted, which may not be there a year or more into the future.

It has always been this way for the gold miners. They had a heyday back in the 1970s gold bull market. But if you examine a chart of that whole period where the gold stock average is charted alongside the gold price, you clearly see this believability effect:

The green line is the gold price and the black line is a representative basket of gold stocks. If you look at the rise in gold stocks in 1973 and 1974 (black line), you see that this strong climb in the gold stocks took place over the course of one of the most brutal bear market collapses in history: 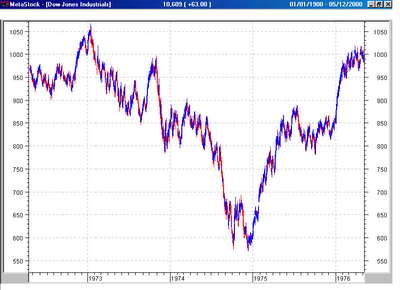 We think our 2008 was bad, but if you add a zero to the above Dow chart figures, you see that this was just as bad. The S&P 500 quickly lost about 50%. The second thing that stands out about how the gold stocks did this massive '73/'74 climb was that the price of gold did a slow, orderly climb over this time period. It did not go berserk. Mining investors were believers in this gold climb and readily moved the stocks up in lock step with the gold price, even out-performing gold, never mind the Dow crashing around them.

In sharp contrast, look at the behavior in 1978 and 1979. This stock market was very placid compared to the one in 1973-74, and gold was accelerating upward but a little too fast to be believable. And the gold stocks lagged far behind. It's interesting that at the time of gold's peak in January of 1980, the miners were way behind the curve, but caught up in a mighty rush over the next year. This is because, even after the gold price peaked, it stayed very high for another year. So the miners' investors were being converted to the new level, and the stocks climbed big. The rule seems to be that a fast climbing gold price must stay elevated for at least a year before mining investors take a new level seriously.

This believability thing is our current problem with the gold stocks. There is so much skepticism about the climb in gold; all you hear is bubble talk. The miners are priced for about a $1200 gold price. But it has been over a year and a half since gold first traded at $1200. The mining investors are going to have to get religion before very long.

But is this near the end of the bull market as in 1980, when the miner investors got religion just in time for the start of gold's bear market of the next 20 years? At the end of the '70s gold bull, it was all about the inflation hedge; 12 % inflation was eating us alive. That was the big political issue of the day. Inflation was public enemy #1 and the WIN campaign (Whip Inflation Now) was on all our minds. If you were like most people, you were watching everything you pay for go up 12% or more each year and wondering how your wages and savings account were ever going to keep up with that. The economy was stagnant. Everybody was wondering how it all was going to end. Survivalist books were all the rage.

But there was no global mountain of debt. This was before the marvelous invention of the financial weapons of mass destruction, back in the simple days. With our present gold bull market, we have no inflation but an out-of-control global rampage of debt that is eating us alive. This is our new public enemy #1. It's quite a different bull market really. And I think the end of it won't happen until some kind of new, stable set of global currencies emerge that are gold- and silver-backed, along with perhaps some other commodities.

You often hear the guidance that this gold bull will die when interest rates are ramped up. But as I outlined in my article "Will Higher Interest Rates Kill The Gold Bull?" that's certainly not what happened in the 1970s, when it was all about rates. Interest and gold did a powerful climb together when they finally decided to defend the dollar to the death. But let's suppose for a moment that the rate guidance is right and the up cycle in rates ends the bull. If you believe that, then you were just given a guarantee from Ben Bernanke that our gold bull will live until at least 2013, where ultra low rates will, according to the Fed's latest statement, run to.

But even out at the rate ramp up, whenever that begins, you have a vastly different dynamic than with past gold bull markets. In the good ol' '70s, you just had an inflation problem. That can be killed with high enough interest rates and it was. Paul Volcker came to town, and it was slam, bang, a quick and deadly kill of inflation, and we were fine. And the gold bull quickly bit the dust. But if they tried that now on the mountain of debt that's already choking us to death on the lowest interest rates in history, that could be a problem.

Be that as it may, the current gold bull is all about the debt/currency problem, not interest rates. Its ultimate solution will not be as quick and easy as the '70s and will probably involve the very thing that would have to reprice gold to much higher levels: Currency backing. This all won't happen expeditiously. Corrections will come and go, with increasing speed and less predictability. But will the gold bull market go away anytime soon? Probably not. As I heard a commentator say the other day, if you think the top of the gold bull is here, I have one question for you: "Where is a Paul Volcker who is going to make that happen?" Time-wise and price-wise, it may look like it's about time for it to end by a 1970s comparison, but this isn't the 1970s. If only it was.

I agree with Jim Cramer when he said on Mad Money last week that gold is one of the long term power trends from here that should be bought and held. He points out that gold historically has made up 5% of all portfolios. But now, with an unprecedented global currency crisis raging, and despite all the bubble talk, it makes up only about 1.5% of all investment. The bubble is all talk and no dough.

A negative for the gold mining stocks has been the nagging competition for investor dollars posed by the rash of new bullion ETFs. Why risk mining company problems when you can now own the metal without having to take delivery? But as these new products have proliferated, so has the worry over paper versus physical gold ownership. Some paper vehicles may run into problems with insufficient metal backing in times of sharp metal price moves and may not give their shareholders the metal they think they own. If price tracking problems like this arise, or even if the worry over it grows, it will reverse the negative that ETFs have been presenting to gold miner ownership. Gold miners don't mine paper.

This all has extremely bullish implications for the gold stocks. It means the $1200 stable average gold price the HUI has been stuck at for over a year is not even in the same ball park as what a strengthening climb in gold will likely produce. There may be a powerful catch up move brewing.

Their technical condition is showing that. Even if you believe the general stock market is going to be bad, you have to take note of what the gold stocks did in 1973-74. When you consider the vastly better relative performance of the miners over our recent market crash compared to the 2008 behavior, you could suspect a massive rally in the miners is approaching. Cramer, who belittles technical reads (but goes over a thick book of charts every week) noted last week that the gold miners were getting "jiggy." I guess that's the best technical term he could come up with, but I think I know what he means.

This jigginess will especially apply to those that are currently in production with meaningful cash-flow (less controlled by property development news). Some examples of such names with very low cash-flow valuations relative to a possible fast climb in revenue: