Personally I don't think the stockmarket will end up down this year; I think this year will end on the upside. 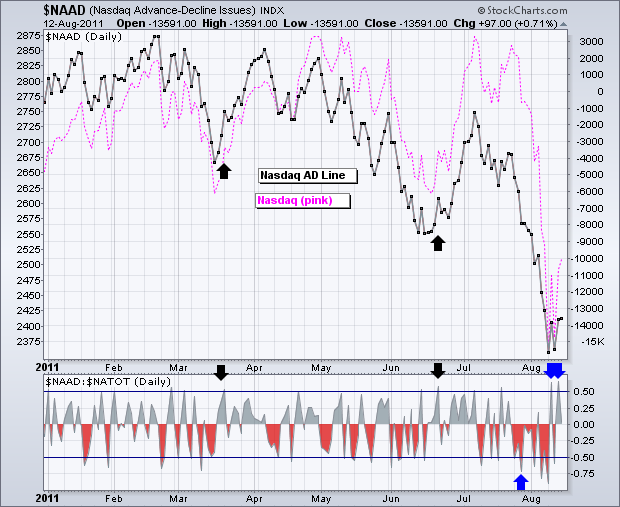 It is surprising how much information the RSI indicator give us and that most people are not using it.  RSI for SPY yesterday closed lower at 41.98, right about an important line of resistant that most likely be broken tomorrow as the future is lower.  To see when the down move can meet resistant, the following RSI values are important:  6/24/11 RSI Low of 38.02,  8/3 RSI High of 35.24 adn 8/9 RSI High of 31.  If the bear has it way and manages to take the market below these 3 RSI Levels and back below 30 and better yet, takes SPY below 1100, reverse up with a higher RSI value than the panic lows of 8/4 -8/10 (16.7 to 26.59), the forces will be ready to step in to drive the market up big time. ?? Again, pure speculation.

Important RSI level for $VIX to hold are as follow:

Look for $VIX to reverse up at these level for stock market to go down.  If these 2 RSI level are broken decisively, the short term bear case may be over.  ??

" Further analysis suggests that historically VXX captures about 50% of the daily move in the VIX (although YTD=85%, most likely due to record high implied correlations), largely explained by mean reversion. Theoretically, the VIX index should outperform during a rally because traders will NOT anticipate the VIX to be higher in 30 days. Therefore, the VXX would underperform and get crushed. The opposite would be true in bear markets.

In summary, to say that VXX is a terrible ETN would be inaccurate, there is no mispricing between the two entities. VXX will perform worse than the VIX under the conditions that the market anticipates lower volatility in the future. Unless you are a futures trader, the best way to hedge may simply be buying SPY puts or put spreads. Looking at the metric from a total return basis, we can see the lack of support." VXX has outperformed ^VIX since 8/9/11 as it anticipate higher volatility in the future and may be a good vehicle to participate in a bear move in a bear market at the right timing.  The $VIX:VXX Ratio also gives a good indication whether the sentimental stauts of the market as being bull or bear.  Ratio > 1 favor bear and ratio < 1 favor the bull.

Today ^VIX is down and VXX is up. Traders are anticipated volatility will soon return. ??

Permalink Reply by J CHAN on August 19, 2011 at 11:57am
Correction. I misread the chart. It is VIXY matching exactly to VXX.

MORRISTOWN, N.J. (MarketWatch) — After Federal Reserve Chairman Ben Bernanke’s speech last Friday, the market sold off rather sharply. But once that selling got out of the way, a strong bullish move took place, carrying the Standard & Poor’s 500 Index higher by more than 70 points in just over one full trading day.

The reversal in price is accompanied by positive reversals in many technical indicators as well. We therefore expect higher prices over the next couple of weeks, although it is likely that there will be a very short-term correction before the next advancing stage.

However, perhaps the most important indicator — the chart of the S&P 500 /quotes/zigman/3870025 SPX +2.83% itself — is still in a bearish mode. However, we think that can be overcome, at least for a while. Thursday and Friday, the market advances were repelled when they reached the still-declining 20-day moving average of the S&P. Today, the index was able to punch through that moving average. In fact, it climbed into the resistance area at 1,200-1,210. Two weeks ago, SPX topped out there and fell back sharply. This time, however, it seems that it should be able to break through.

There is support on the SPX chart at 1,160, and below that at 1,120 — where the S&P either closed or had an intraday low (or both) on six separate occasions since Aug. 8. Later, if that level should be broken, it would be very bearish, but for now the momentum is upward, not downward.

The equity-only put-call ratios have been rising steadily for nearly a month now, and as such they are in a very oversold state. Buy signals are just now being confirmed for these ratios, and — given their seriously oversold condition — these buy signals have the potential to be strong ones. 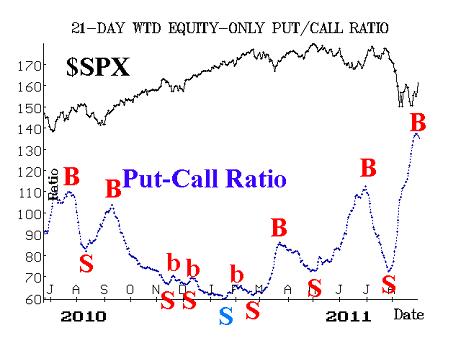 The total put-call ratio is nearing a buy signal as well. It is rare that this indicator, for it has only given 13 buy signals in the last eleven years. But it is definitely going to give a buy signal soon — it is merely a matter of when. At this point, it appears that it will give a buy signal later this week.

Finally, the Chicago Board Options Exchange’s equity-only put-call ratio gave a buy signal a week ago, on Friday Aug. 19. The difference between the equity-only ratio shown in the above chart and the CBOE’s equity-only ratio, is that the data in the chart is comprised of data from all option exchanges, not just the CBOE. However, we monitor both, and the CBOE has a track record of short-term signals. In this particular case, SPX was up nearly 40 points within two days after the Aug. 19 buy signal, thereby fulfilling the projections of that short-term signal. 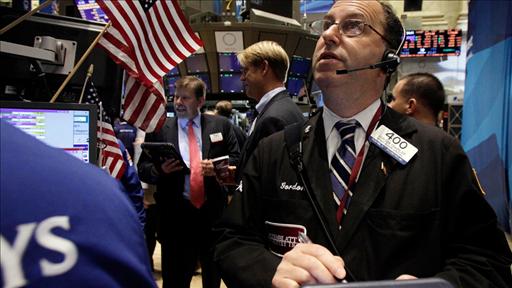 Stocks rallied in some of the thinnest trading of the summer, highlighted by gains for insurers amid relief over Hurricane Irene's relatively light touch on major cities.

Market breadth has been very positive since SPX turned upward on Friday — perhaps too positive. Both Friday and Monday were “90% up days.” That means that advancing issues outnumbered declining issues by at least a 9-to-1 margin and advancing volume outnumbered declining volume by at least that same 9-to-1 margin. While it is positive that a large number of stocks are participating in the rally over the past two days, this is telling us that it’s too much and too fast. We would expect a sharp market correction, lasting just a day, sometime in the next two days.

The volatility indexes /quotes/zigman/2766221 VIX -9.30% /quotes/zigman/2754753 XX:VXO -13.27%  have given a couple of spike peak buy signals in the past week. On Friday alone, VIX traded up to nearly 44, but then reversed sharply downward, trading at 34 before the day ended. Today, it continued to decline, but it was more subdued — losing just over 3 points on a day when SPX was up over 33 points. Hence, traders are not exactly “saying” that volatility is dead. In fact, as long as VIX is above 31 (its mid-August low), there is still the possibility of another high-volatility move. 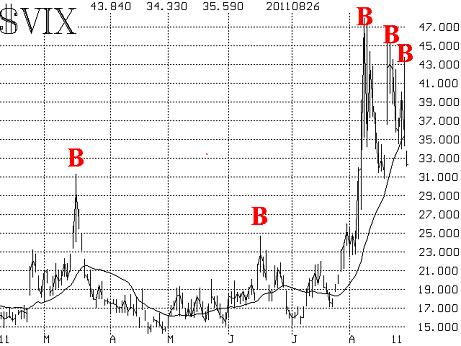 The term structure of the VIX futures continues to slope modestly downward. That is a bearish construct. While the term structure is much flatter than it was a week or two ago, it has still not turned bullish yet — not until the longer-dated VIX futures begin to trade at higher prices than the shorter-dated ones.

In our last market comment, published two weeks ago, we postulated that this current period might be like 1998. (See: Market’s rally from oversold levels may not stick ) That year, there was a large decline in August, a rally into late September, and then a very sharp and volatile decline to new lows by early October. At that point, the market bottomed, and an uptrend resumed.

Another year that has similar characteristics is 2007. The market was rallying for most of the year, blissfully unaware of the financial crisis that loomed ahead. Eventually, though, the fatal phrase “subprime debt” came to light in July of 2007. The S&P 500 fell 160 points from mid-July into August. Then the market rallied to new all-time highs in September, eventually peaking in early October. I do not expect the current market to make new yearly highs on this current rally.

Finally, the S&P topped out in early October, trading down 150 points by Thanksgiving. Of course, this was the beginning of a much longer bear market, but the action in July through October is what I want you to concentrate on. Both in 2007 and 1998, an August decline led to a September rally, but was then followed by another sharp, volatile market decline that made new closing lows.

In summary, the current rally that began last Friday can carry towards resistance at SPX 1,260. Since the market remains volatile, perhaps it can carry even a bit further. But we expect to see another market decline in the traditionally bearish September-October time period.

Lawrence G. McMillan is president of McMillan Analysis Corp. He is an experienced trader and money manager and is the author of the best-selling book, “Options as a Strategic Investment” and editor of the “MarketWatch Options Trader” newsletter.

Shares of Ishares Silver Trust (NYSE: SLV) are developing a pattern on their daily chart that points to a likely big move ahead.

SLV has been recovering from its steep May decline and over the past two months has had three pullbacks to higher lows, on June 27, Aug 9 and Aug 24.

If you draw a line through the lows you get a rising trend support line.

Also, if you draw a line between the April rally highs and the August 22 rally highs, you get a declining trend resistance line.

A break of either would likely result in follow-through buying or selling, in the direction of the break, in coming weeks.